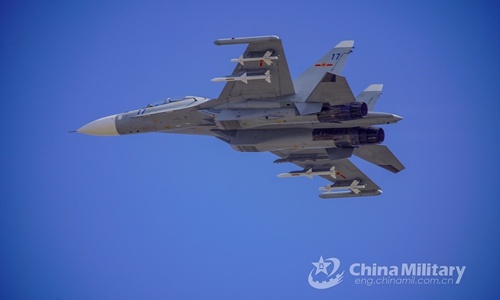 Pilots assigned to a naval aviation brigade under the PLA Eastern Theater Command keep their Su-30 fighter jet in a specified airspace while awaiting further clearance during an actual-combat flight training exercise in mid-February, 2020. (Photo: eng.chinamil.com.cn)

China recently published the flight record of its fighter jets expelling foreign warplanes from the region seen as the South China Sea in May 2020, which is a move that sent a strong signal to the US, as the latter doubled its risky and provocative close-in reconnaissance attempts on China in the region this year compared to last year, Chinese experts said on Sunday.

The lead Chinese pilot said he was ready to fight during the encounter, before the foreign aircraft retreated.

Some foreign military aircraft were spotted conducting close-in reconnaissance on China in May 2020, and an aviation force brigade attached to the People's Liberation Army (PLA) Southern Theater Command Air Force deployed in a coastal frontline air base was tasked to engage, China Central Television (CCTV) reported on Saturday.

Pilot Lu Geng, head of the brigade's air group, immediately led the group in a scramble to engage the hostile aircraft, and succeeded in expelling them, the report said. The warplanes Lu and his group flew were Su-30 fighter jets, which skimmed past islands and reefs in the South China Sea, the report footages show.

"This is the PLA Air Force. You are about to enter Chinese airspace. Leave immediately!" They said in radio communications in both English and Chinese.

Despite the warnings, the foreign warplanes insisted on approaching by taking turns in dealing with the PLA aircraft. After tasking his wingmen to continue tracking the foreign aircraft and taking video evidence, Lu maneuvered to an advantageous position, locked on targets and made a mock attacking move.

This let the foreign military aircraft realize they were at a disadvantage, and after several failed attempts to break away from Lu, they were left with no choice but to retreat, as Lu and his comrades accomplished the mission in safeguarding China's aerial sovereignty, CCTV reported.

Remembering the encounter, Lu said that, "If [they] had started the fight, I would fight. Pilots are ready all the time, and there was nothing to hesitate about."

The CCTV report did not identify the nationality of the foreign warplanes, but observers said they were very likely from the US, as it has been conducting increasingly frequent close-in reconnaissance activities on China since early 2020.

In the same month this year, the US doubled the efforts by sending at least 72 spy aircraft to the region, according to the SCSPI.

The US has been sending electronic reconnaissance aircraft and anti-submarine aircraft for close-in reconnaissance operations on China attempting to gather intelligence on the PLA and contain Chinese military activities, Xu Guangyu, a senior adviser to the China Arms Control and Disarmament Association, told the Global Times on Sunday.

It is necessary to take countermeasures against these activities that are threatening national security by means that include expelling them, Xu said.

The revelation of the encounter to the public a year after its occurrence is a strong signal sent to the still-increasing US close-in reconnaissance activities, and Lu's strongly worded statement displays the PLA's determination and capability to safeguard the motherland, warning of the high risk of the provocative US military activities, analysts said.

The international community should know more about the persistent strategic threats the US is posing to China, and that it is the US that has been making provocations, Xu said.

Lu is no stranger to the public as a guardian of the South China Sea. He and his comrades broke the PLA's record on flight duration in a single sortie using a fighter jet by completing a 10-hour armed patrol mission to the most remote islands and reefs of the South China Sea in early 2020.