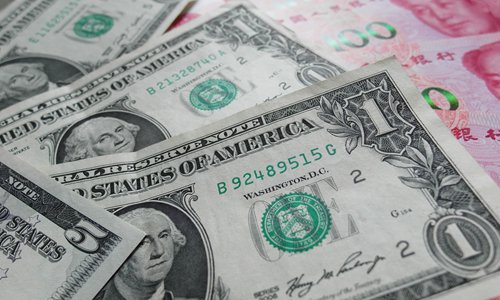 The People's Bank of China (PBC), China's central bank, increased the interest rate on seven-day reverse repurchase (or repo) agreements by 5 basis points to 2.55 percent, according to a statement on the PBC's website on Thursday. The PBC's move came shortly after the Fed raised US interest rates by a quarter of a percentage point on Wednesday (US time), with at least two more hikes by the Fed anticipated later this year. E Zhihuan, chief economist at Bank of China (Hong Kong), said that mainland monetary policy has remained highly independent for a long time. "In 2017, the domestic repo rate was raised by 0.25 percent in total, only one-third of the scale of the US dollar rate hike. I don't think this time the reverse repo rise will have any big influence on China's overall interest rate environment," E told the Global Times on Thursday. The open market operation is a "normal market reaction" to the Fed's rate rise and is "in line with market expectations," a representative from the PBC's open market operation division was quoted as saying in the statement.Zhou Yu, director of the Research Center of International Finance at the Shanghai Academy of Social Sciences, said that the move is also aimed at restraining signs of capital outflows that have emerged recently.China's foreign currency reserves fell by $27 billion month-on-month to about $3.13 trillion by the end of February. Move shows continuityAccording to Zhou, the PBC's move to adjust short-term rates shows a continuity of policy tone despite the change of PBC governors recently. "Since 2017, the PBC has shown a tendency to use open-market operations as an adjustment tool. In December 2017, the PBC also raised interest rates in its open market operations after the Fed increased its policy rate," Zhou told the Global Times on Thursday."The PBC tends to adjust short-term interest rates as it is more flexible and reversible than changing benchmark interest rates," Zhou said, adding that changing long-term rates would release a signal that the PBC is tightening its monetary policy, which the government does not want. China's benchmark one-year lending and deposit rates have remained unchanged since October 2015. Yuan's calm reaction The yuan's central parity rate against the US dollar rose by 229 basis points on Thursday, according to PBC data."It is not the first time that the yuan has edged up despite a US dollar interest rate hike, as the influence of market anticipation of the US rise had already been released beforehand," Zhou said. Ding Jianping, a professor at the Shanghai University of Finance and Economics, said that the dollar hike would not have a big impact on the yuan as China's economic rebound has sound fundamentals. Besides, market concerns about the US' economic prospects are growing, Ding told the Global Times Thursday. The yuan has appreciated by about 3 percent against the US dollar so far in 2018. Zhou noted that the yuan's exchange rate in the basket of currencies that make up the IMF's Special Drawing Rights, an alternative reserve asset, has been stable. Therefore the government won't care too much if the yuan fluctuates a little, Zhou said, adding that the yuan's exchange rate against the dollar has been firm at about 6.3 since early February.