China ramps up COVID-19 restrictions ahead of two major festivals 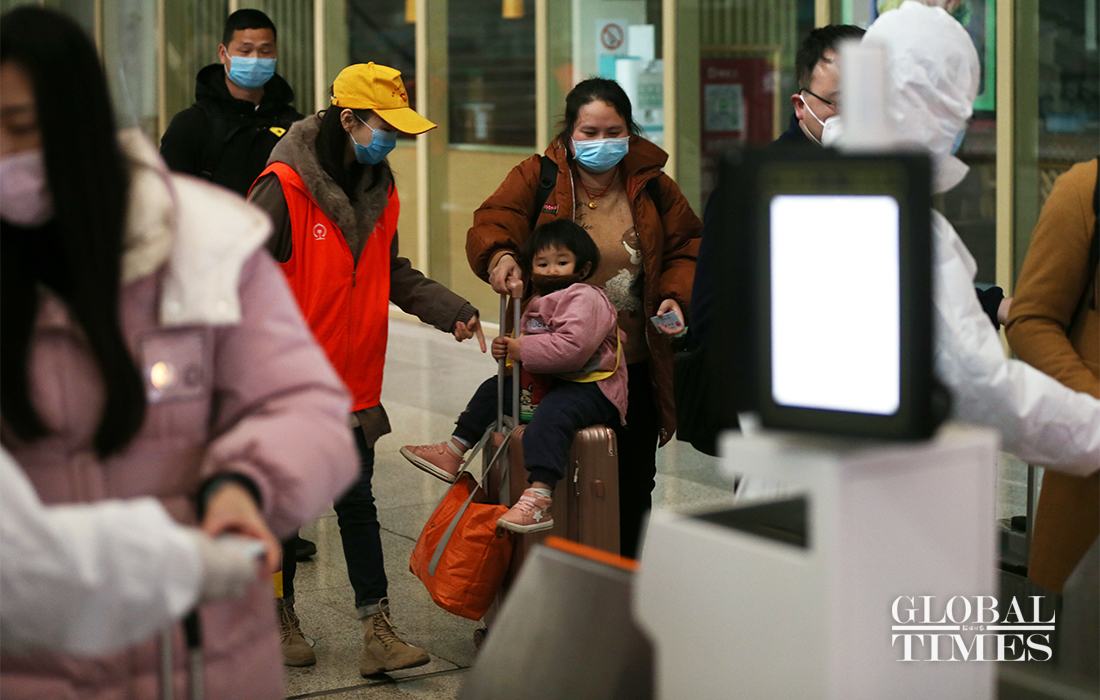 Western countries have been gripped by the coronavirus nightmare since before Christmas with mega-cities being locked down, flights halted and daily new cases continuing to break records, a familiar scene to many Chinese who experienced the nation's early COVID-19 outbreak during its largest festival in 2020. With the Spring Festival holidays fast approaching, Chinese officials, health experts and residents were confident that China, with its sufficient experience, preparation and strict measures in viral control, will not see the coronavirus nightmare repeat again during the Spring Festival holidays in 2021.

One month ahead of the Spring Festival travel rush, Chinese governments at different levels have come up with strict, detailed measures to build a strong defensive wall against a possible virus onslaught amid mounting pressure from imported infections and sporadic domestic cases, calling on people to stagger holidays, reduce travel and gatherings to avoid possible infections.

According to a notice regarding the New Year and Spring Festival holidays issued by the General Office of the Communist Party of China Central Committee and China's State Council on Thursday, governments across the country have to be on constant guard to prevent imported infections and a rebound of domestic cases, urging limitations on personal mobility and gatherings during the two major holidays. 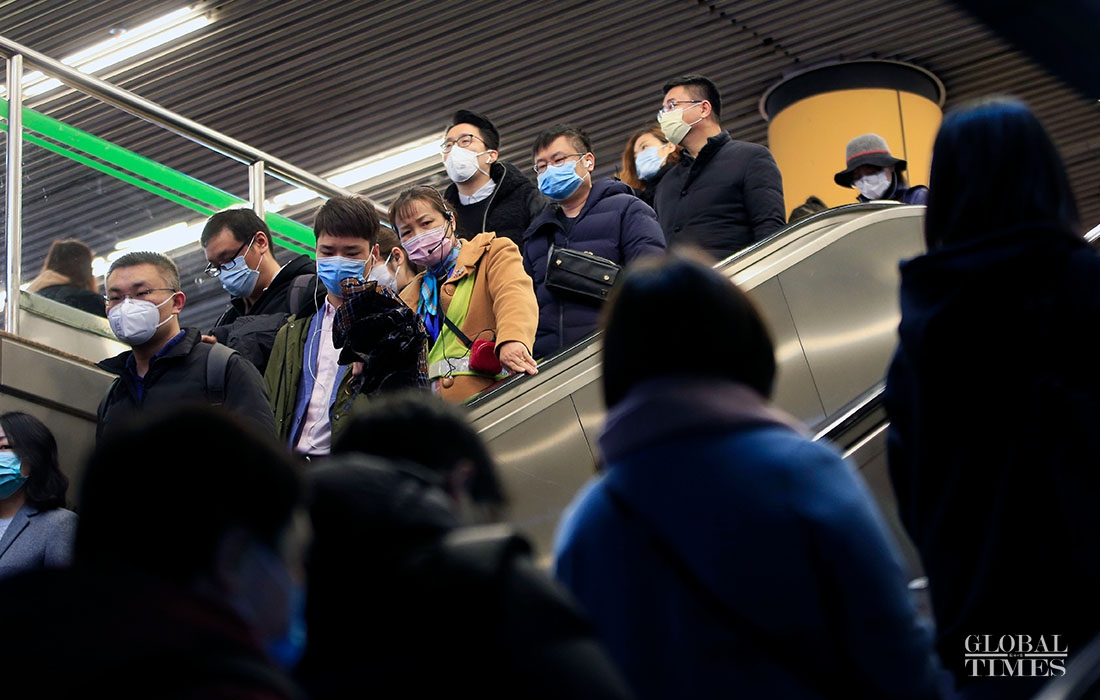 Local governments should also prevent infections resulting from imported products and standardize personal protection, conduct regular monitoring and nucleic acid testing for those who have had direct contact with them, and adopt strict sanitation measures in key places, according to the notice.

Also on Thursday, Beijing Party chief Cai Qi said at a meeting that civil servants and personnel working at state-owned companies in the capital should take the lead in staying in Beijing during the upcoming holidays.

Beijing will also reduce Spring Festival related events, will not hold sports events and encourage companies and schools to stagger their holidays, calling on residents to stay in Beijing during the holiday period and advising Beijing-based companies not to arrange travel for their employees outside the capital or abroad, Chen Bei, deputy secretary-general of the Beijing municipal government, said at Friday's media briefing.

Several civil servants in Beijing told the Global Times on Friday that they have been advised not to leave Beijing during the holidays, and some said they have not received any notice but expected it to come soon.

Several employees at Beijing-based private companies reached by the Global Times said they also received the stay-in-Beijing advisory, and they plan to invite their family members to come to Beijing before the Spring Festival holiday starts.

Not just in Beijing, several provinces and cities including Northeast China's Liaoning Province, which has been hit by sporadic cases of coronavirus this week, issued notices to require employees of public institutions, departments and state-owned companies to apply for approval before leaving the city, and called on companies and government organs to reduce offline meetings and gatherings.

Supermarkets are advised to limit their customer numbers and promote online sales. Airports, buses and subways are also required to implement strict disinfection and temperature-checking measures.

Chinese analysts believe that the world's largest population migration during the holidays will swell the risk of a COVID-19 resurgence in China, and measures such as imposing a lockdown in one city are possible if the risk continues to grow. But with an improved awareness of ordinary residents and strict prevention and control measures taken by governments at all levels, Chinese people do not need to worry about a virus resurgence, analysts said. 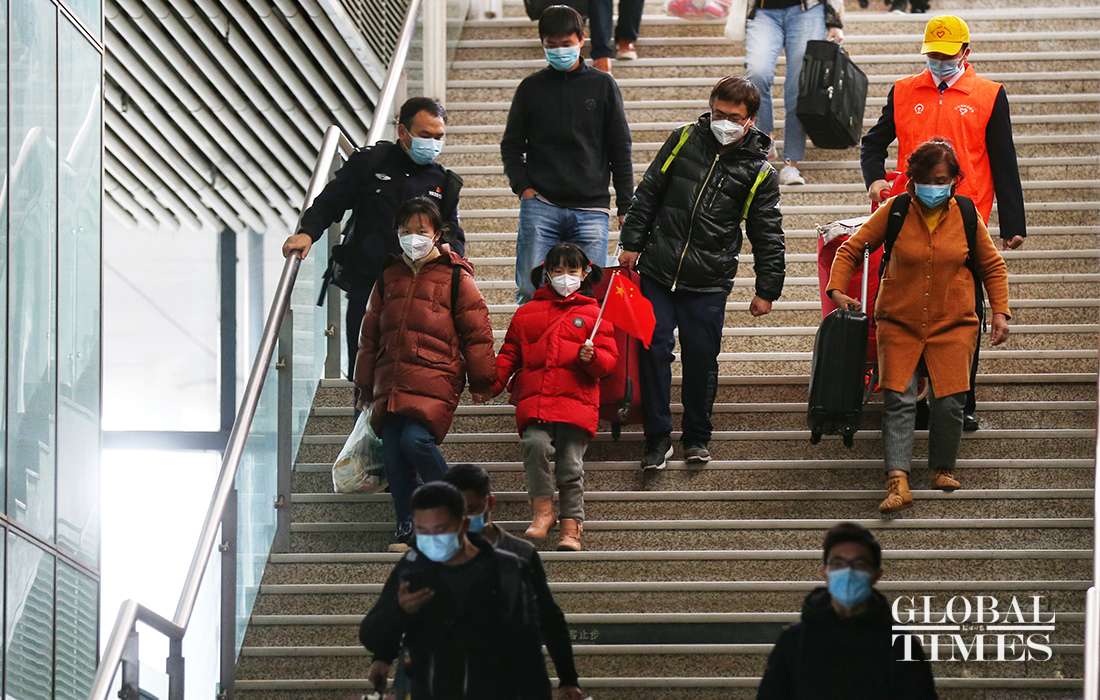 On Friday, the hashtag of key points for virus prevention during New Year and Spring Festival holidays made the hot topic list on China's Twitter-like Sina Weibo, with more than 30 million netizens viewing and discussing the topic.

Some Chinese netizens said they will cancel their travel plans and remain where they are to avoid possible infections during the travel rush, and some said they will return home ahead of schedule.

A Beijing-based immunologist who requested anonymity told the Global Times on Friday that people should remain where they are during the holidays as the human migration during Spring Festival will raise the risk of virus transmission.

"It's possible to impose a lockdown in one city or cancel arrangements for the Spring Festival travel rush if the pressure on prevention continues to increase," the immunologist said.

The Chinese Foreign Ministry announced the suspension of flights to and from the UK due to a new coronavirus strain on Thursday, and on Friday, three major Chinese airlines, Air China, China Eastern and China Southern all made their suspension plans.

Yang Zhanqiu, deputy director of the pathogen biology department at Wuhan University, told the Global Times on Friday that it's possible that China will suspend flights to and from more countries if the epidemic situation worsens drastically in more countries.

But Chinese health experts reassured the public that a major outbreak during this year's Spring Festival will not be repeated.

Wu Zunyou, chief epidemiologist of the Chinese Center for Disease Control and Prevention, told China Central Television on Thursday night that it's normal for China to have sporadic cases when Europe, America and Asia have seen drastic new waves of the virus, and China's monitoring system can detect those sporadic cases in a timely manner.

Yang said that China's response over the year has turned from passiveness to active defense and mobilized all of its residents, and its strict, precise measures have proven successful, which has protected its residents before mass vaccinations.

China's measures are stricter than in many Western countries, and Chinese people's awareness regarding virus prevention was also higher than people in such countries. The spread of the virus will be blocked once the vaccine is promoted across the country, Yang said.

Chinese analysts also stressed that China has to constantly remain vigilant, and cannot allow any slack in epidemic control.