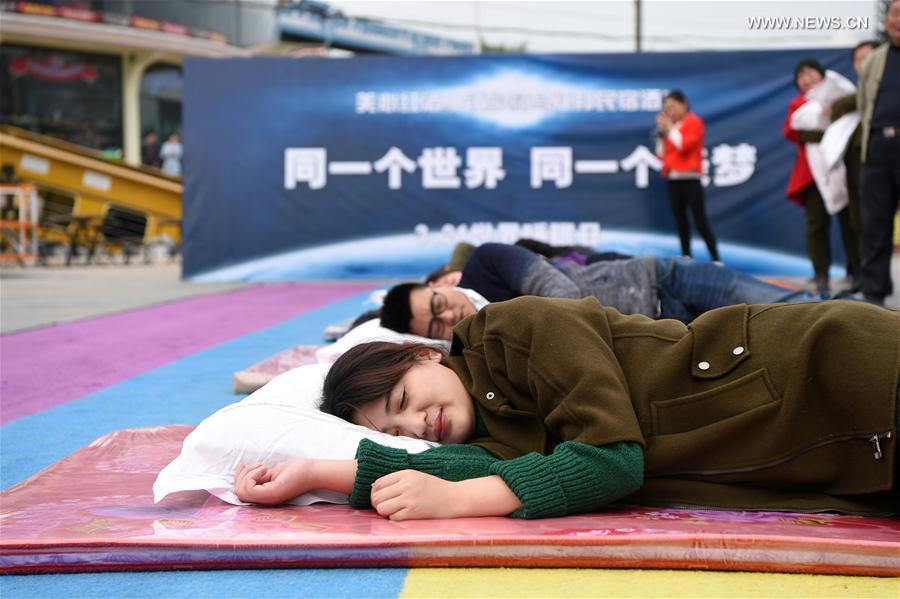 Tourists try the recommended sleeping position during an activity to call for healthy sleep at a scenic area in southwest China's Chongqing Municipality, March 20, 2017, one day ahead of the World Sleep Day. (Photo: Xinhua)

A total of 16 countries were ranked in the study, with Singapore coming out on top with a "fatigue score" of 7.20, Focus, a German-based weekly news magazine, said on Sunday.

The second and third places went to Mexico (7.01) and Brazil (6.28), with the United States, Japan, the United Kingdom, New Zealand, and Australia wrapping up fourth to eighth spots, according to the study.

China registered a score of 4.59, placing it on the ninth spot, and the least fatigued country honor went to the Netherlands with a score of 2.01, said the study.

The study rated the most fatigued countries based on sleep hours, average annual work hours, amount of screen time and searches of sleep-related terms.

In terms of screen time, China stood seventh with time spent on the internet averaging 5 hours 52 minutes per day. Brazil is the most internet-addicted country, with a daily internet time of 9 hours and 29 minutes, followed by Mexico and Singapore.