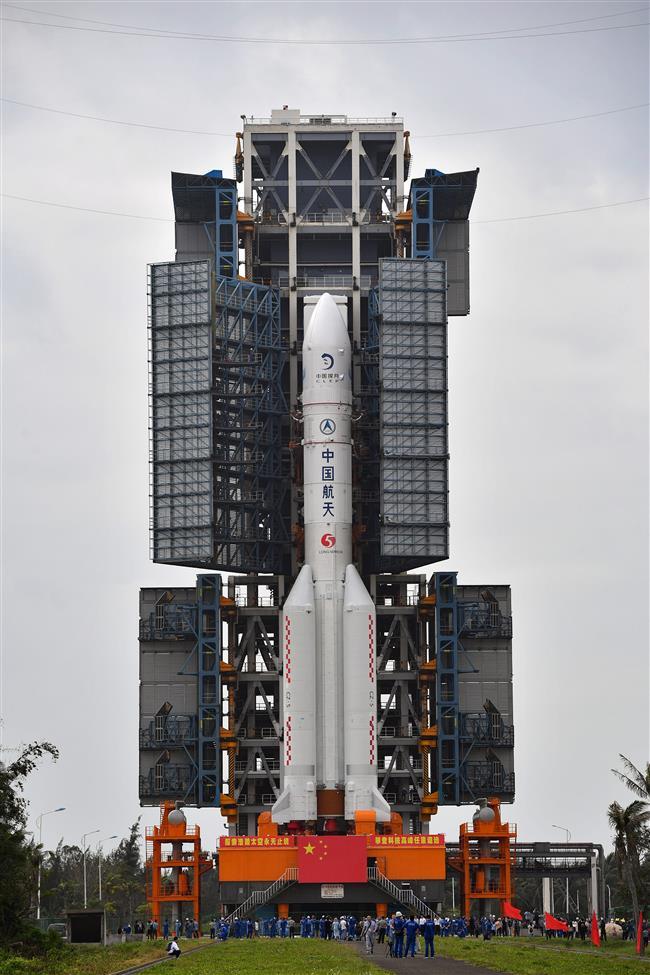 China on Tuesday moved a massive rocket into place in preparation for launching a mission to bring back materials from the moon for the first time in four decades.

The fifth Long March-5 was transported by tractor from its hangar to the nearby launch site at the space base in Wenchang along the coast of the southern island province of Hainan.

The Chang’e-5 lunar probe it will carry is scheduled to launch in late November, according to the China National Space Administration.

Space engineers have conducted a general assembly and tests on the rocket after it was transported to Wenchang in late September. It took about two hours to vertically transport the large rocket to the launching area early Tuesday. Final examinations and tests will be conducted on the rocket before the launch.

The lunar probe, which weighs over 8 tons, is comprised of four parts: an orbiter, a returner, an ascender and a lander. The lander will drill 2 meters beneath the surface and scoop up around 2 kilograms of rocks and other debris to be brought to earth.

The samples will be placed in a vessel aboard the ascender, which will dock with the orbiter and returner, orbiting the moon. The samples will then be transferred to the returner. After separation, the returner re-enters the earth alone, which is expected to land in north China’s Inner Mongolia in mid-December.

“This is the first sample return mission from the moon involving unmanned technology. The work is more complicated than manually extracting samples from the moon,” said Pei Zhaoyu, CNSA spokesperon for the Chang’e-5 mission.

What is more difficult for the job is “the short launch windows,” according to Mao Wanbiao, deputy director of the Chang’e-5 mission launch center.

The mission would allow scientists to study newly obtained lunar materials for the fist time since the American and Russian missions of the 1960s and 1970s. It will contribute to the scientific studies in fields such as the formation and evolution of the moon.

The Long March-5 carrier rocket, nicknamed “Fat 5” because of its bulky shape, is currently China’s largest launch vehicle. This is the second time the carrier rocket will be put into practical use. On July 23, it successfully launched China’s first Mars mission Tianwen-1.

“The previous launches have tested the rocket in certain key technologies, so we’re more confident this time and I hope it’ll be successful. Now our focus is on key control measures at the launch site, especially in the areas related to the flying mission,” Liu told CGTN.

The Chang’e lunar mission, named for the Chinese moon goddess, is among China’s most ambitious as its space program continues to build steam since it first put a man in space in 2003, becoming only the third nation to do so after the US and Russia.