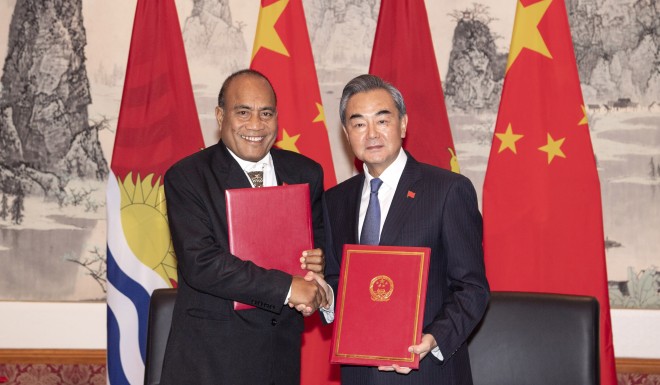 Since the resumption of diplomatic ties more than a year ago, Wang noted, China-Kiribati relations have got off to a good start and achieved fruitful results.

Facts have proved that the political decision of restoring diplomatic ties is entirely correct and serves the best interest of Kiribati and its people, Wang said.

Since the COVID-19 outbreak, the two countries have stood together and supported each other, which further enhanced their friendship, Wang said.

China understands the special challenges Kiribati faces in responding to the pandemic, and will continue to provide vaccines and medical supplies to support Kiribati's fight against the coronavirus, Wang said.

Noting that this year marks the 100th anniversary of the founding of the Communist Party of China (CPC), Wang said China has successfully accomplished its first centenary goal and is embarking on a new journey to fully building a modern socialist country, which will provide more opportunities to Kiribati and other countries.

China will encourage its enterprises to invest and operate in Kiribati, and hopes that Kiribati will leverage the preferential policies such as zero-tariff treatment for 97 percent of exported items to increase exports to China, Wang said.

He added that China hopes both sides will strengthen dialogues, exchanges and cooperation in all fields to ensure the steady and sustained development of bilateral relations.

Wang said China highly appreciates Kiribati's adherence to the one-China policy, firmly supports its choice of pursuing a development path suited to its own national conditions, and helps the country accelerate development and achieve prosperity.

Being members of the developing world, China and Kiribati share extensive common interests, and should continue to give each other staunch support in the international arena, jointly uphold the legitimate development rights and interests of developing countries and international fairness and justice, and defend non-interference in other countries' internal affairs, which is a basic norm governing international relations, Wang said.

Maamau, for his part, asked Wang to convey his best wishes to President Xi, and congratulated the CPC on the 100th anniversary of its founding, and sincerely thanked China for its strong support for its social and economic development, particularly for the its fight against the pandemic.

Kiribati cherishes its relations with China, and is willing to deepen the joint construction of Belt and Road and to strengthen bilateral cooperation in infrastructure, education, economy, trade, investment and medical treatment, he said.