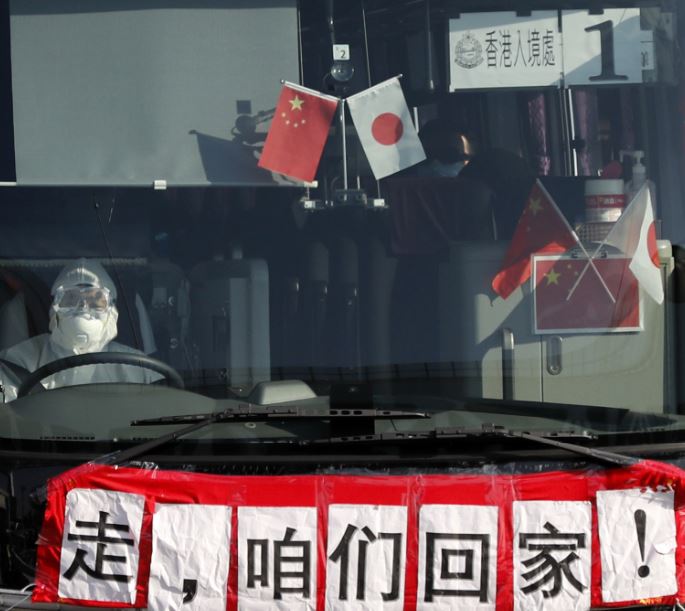 A bus with a Chinese banner saying "Let's go, we are going home!" carrying the Hong Kong passengers from the quarantined Diamond Princess cruise ship leaves a port in Yokohama, near Tokyo, Friday, February 21, 2020. (Photo: AP)

China is ready to strengthen cooperation with Japan on the containment of the novel coronavirus (COVID-19), jointly safeguard the health and safety of the two peoples and uphold public health security in the region and the world, Chinese Ambassador to Japan Kong Xuanyou said.

In a joint written interview with the Chinese media in Japan on Saturday, Kong called on the two sides to tap respective advantages to contain and mitigate the COVID-19 outbreak, adding that China has the confidence, capacity and certainty to score an outright victory over the epidemic.

After the outbreak of COVID-19, the Chinese embassy in Japan immediately activated the emergency mechanism and issued the first consular notice concerning the epidemic on January 23, reminding Chinese nationals and tourists in the country to pay close attention to the development of the epidemic and take protective measures.

Meanwhile, the embassy found out the exact number of tourists from Hubei Province stranded in Japan in a short period of time, and coordinated three chartered flights to bring the 541 Hubei tourists back to China safely.

Under the overall coordination of the central government, the embassy worked closely with the Commissioner's Office of the Chinese Foreign Ministry in the Hong Kong Special Administrative Region (SAR) as well as the HKSAR government to arrange chartered flights to bring Chinese compatriots stranded on the Diamond Princess cruise ship back from Japan.

According to Kong, since the outbreak of the epidemic, diplomats at all levels of the embassy have maintained intensive contact with the Japanese government, the ruling parties and relevant authorities.

The Japanese government has fully understood and offered sincere support and assistance to China's anti-epidemic measures. The central government, the Tokyo metropolitan government and other local governments, as well as Japanese enterprises, friendly groups and individuals, have provided assistance to China at the critical juncture in the prevention and control of the epidemic. Their actions have received positive responses and gratitude from the Chinese people.

At present, Japan has the highest number of confirmed COVID-19 cases outside China. Noting the development in the spread of the epidemic in Japan, the Chinese embassy contacted relevant domestic manufacturers and charitable organizations to donate a batch of novel coronavirus test kits to Japan.

After the news was posted on the Chinese embassy's social media, it received more than 600,000 views and nearly 10,000 likes in a short period of time. Some Japanese netizens wrote, "Thanks for China's selfless help at the moment. As close neighbors, Japan and China should work together to tide over difficulties."

The ambassador urged the two sides to continue to strengthen exchanges and cooperation in virus detection, share experience and practices in epidemic prevention and control, work together to overcome the difficulties and carry out mutual learning and mutually beneficial cooperation in infectious disease prevention and control and public health system.

26 new cases of novel coronavirus were confirmed in Japan on Saturday, bringing the total number of confirmed cases in the country to 769, according to Japan's public broadcaster NHK.

That figure includes 634 cases from the Diamond Princess cruise ship.