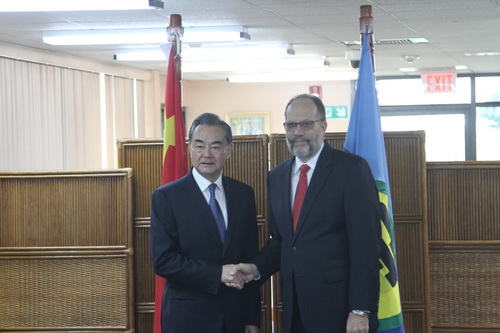 China shares CARICOM countries' position that multilateralism should be adhered to and the free trade system be actively upheld, said Wang during his meeting with Irwin Larocque, secretary-general of CARICOM whose secretariat is based in the Guyanese capital.

China attaches importance to CARICOM countries' concerns and legitimate needs regarding climate change, he said, adding that China is willing to continue to push forward the effective implementation of the Paris Agreement and to urge developed nations to fulfill their commitments.

China will, within its means, provide developing countries with assistance within the framework of South-South cooperation, he said.

Wang said that CARICOM, as a bloc of developing countries, is the most important integration organization in the Caribbean region and a banner under which regional countries are united for self-improvement.

Noting that both China and CARICOM member states are developing countries, he said that the two sides share extensive common interests and their cooperation represents a vital part of the broader cooperation between China and Latin America.

China appreciates efforts made by CARICOM countries and its secretary-general to advance the organization's cooperation with China, Wang said, adding that China is ready to make further efforts to build a community of a shared future for China and CARICOM on the basis of their comprehensive cooperative partnership.

Larocque said CARICOM speaks highly of China's important influence and leadership in international affairs such as the combat against climate change, and particularly appreciates China's positive role in promoting South-South cooperation and defending the rights and interests of developing countries, including CARICOM members.

Expressing thanks to China for its invaluable assistance to CARICOM countries hit by hurricanes last year, Larocque said CARICOM is pleased to see China and CARICOM members are constantly making progress in their cooperation in a wide range of areas.

CARICOM endorses the building of a community of a shared future for mankind and is ready to forge closer relations with China and deepen cooperation between the two sides, he said.

CARICOM also stands ready to strengthen coordination and cooperation with China on multilateral agendas and join hands with China to preserve the authority of multilateral institutions represented by the United Nations and the World Trade Organization and safeguard the overall interests of developing countries, he added.

Wang's visit to the CARICOM secretariat is the first made by a Chinese foreign minister.