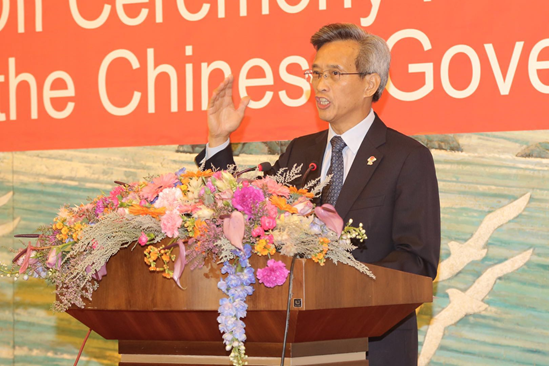 Pretoria (People’s Daily) — This week, in the administrative capital city of South Africa, China’s ambassador Lin Songtian announced, “China is ready to join the efforts of South Africa and the international community to uphold multilateralism, safeguard global common values, and oppose all forms of unilateralism, protectionism, and individualism.”

Lin’s words were just a small part of an address he gave while celebrating the Chinese government scholarship, a national scholarship program that has provided hundreds of South Africans with the opportunity to study in China.

This year, 32 students received scholarships to study at the undergraduate, graduate and doctoral level, and included 17 academic disciplines.

“We ourselves are committed to upholding the principles of planning together, building together, sharing together, and working together to achieve a win-win cooperation for common development, while building a community with a shared future for mankind, so that the people of the whole world will be able to live a better and happier life," Lin stressed.

“Today, we are living against the backdrop of an extremely complex and volatile international situation. Because of certain superpowers who resort to unilateralism, protectionism, and extreme individualism, our economic globalization, and the rule-based free trade system are confronted with the gravest of backlashes and sabotage," Lin said.

"The global community, along with South Africa and every developing country and emerging market is paying the price for it and have joined hands with one another to fight for fairness and justice. As currency in Turkey, Russia, South Africa and other markets continue to slide, global economic recovery channels have suffered a heavy blow along with everyone else in the world except for the Americans, and have been forced to deal with the trade war waged by the US," said the ambassador.

“Never before has fairness, justice, democracy, human rights, and rule of law been challenged and damaged to such a grave extent,” he added.

Lin noted that South Africa is a country of principle, and has played an important and positive role in regional and international affairs. Moving forward, China will further strengthen its cooperation and collaboration with South Africa in FOCAC, BRICS, G20, UN and other multilateral fora, to safeguard shared and long-term interests of China and South Africa.

“China stands ready to dovetail our development strategies with South Africa, deepen friendly and mutually beneficial cooperation across the board, and encourage more Chinese companies and others to come here for investment and tourism, while offering  more opportunities for South African exports to China,” said Lin.

“In a word,  China is ready to give its full support to South Africa to grow the economy, create jobs, eliminate poverty, and achieve sustainable development,” he said.