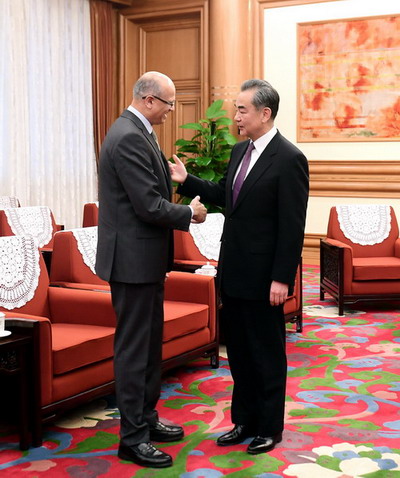 A Chinese Foreign Ministry spokesperson made the comment at a routine press conference on Monday.

Common interests are far greater than difference between two sides, Geng stressed, and the two sides should strengthen unity and cooperation, maintain the positive momentum of the healthy and stable development of bilateral relations since the leaders' summit in Wuhan, Hubei Province from both countries, and safeguard the common interests of emerging markets and developing countries, Geng noted.

For his part, Gokhale said that India is willing to maintain high-level exchanges with China, enhance mutual understanding, take care of each other's concerns, and promote greater development of India-China relations, according to Geng.

When asked if the two sides covered topics related to UN Security Council resolution 1267, and India's participation in the second Belt and Road Forum for International Cooperation, Geng reiterated that common interests are far greater than differences between two sides, and the Chinese side is ready to meet the Indian side half way.

Geng also mentioned that Chinese Vice Foreign Minister Le Yucheng and deputy director of the Office of the Foreign Affairs Commission of the Communist Party of China Central Committee Liu Jianchao would also meet with the Indian official on Monday afternoon.