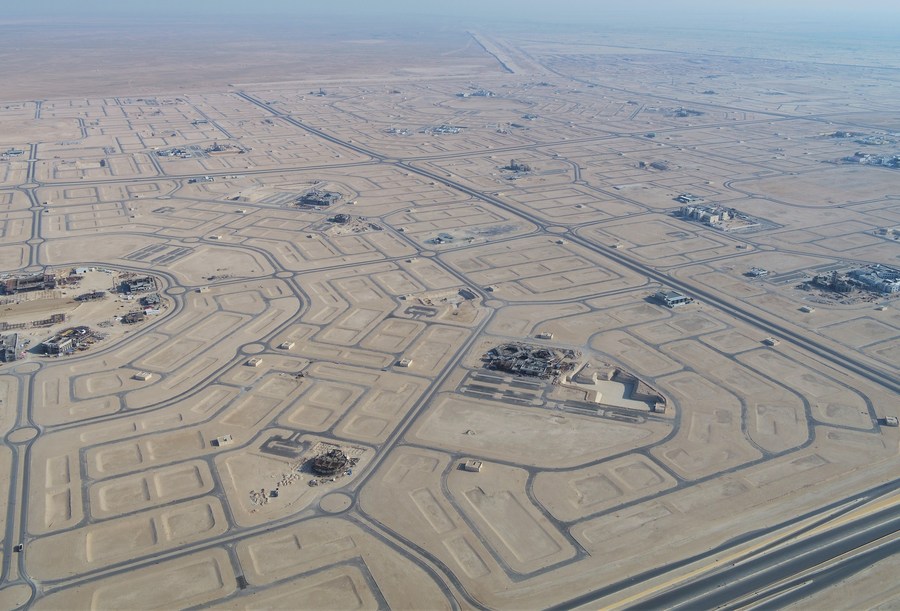 Aerial photo taken on Feb. 27, 2021 shows the construction site of a project of China Gezhouba Group Corporation (CGGC) in a desert of Jahra Governorate, Kuwait. (Photo by Chen Cichao/Xinhua)

Wang made the remarks when meeting with Kuwaiti Foreign Minister Sheikh Ahmad Nasser Al-Mohammad Al-Sabah in the Uzbek capital of Tashkent.

Noting that Kuwait was the first Gulf Arab country to establish diplomatic relations with China, Wang said both sides uphold that all countries should treat each other equally regardless of their sizes, and firmly support each other on issues concerning their core interests.

The two countries have forged an unbreakable friendship through the test of international turbulence in the past 50 years, he added.

Wang also said that China firmly supports Kuwait in safeguarding its own sovereignty, security and stability, and stands ready to work with Kuwait to promote the continuous development of bilateral relations.

China will continue to support Kuwait in its fight against the COVID-19 pandemic, and is ready to strengthen the docking of the Belt and Road Initiative with Kuwait's Vision 2035, he said.

China is also willing to build a whole-industrial-chain strategic partnership in energy with Kuwait, and continuously open up new areas of cooperation in information technology, artificial intelligence and cyber security, Wang said.

China appreciates the unique and constructive role played by Kuwait in regional affairs, and hopes to work with Kuwait to restart the free trade agreement talks between China and the Gulf Cooperation Council (GCC) as soon as possible, and promote the China-Arab States Cooperation Forum with more achievements.

For his part, Ahmed said that Kuwait would like to take the opportunity of the 50th anniversary of diplomatic ties between the two countries to formulate a plan for trade and investment cooperation between the two sides in the next five years, so as to inject new vitality into the development of bilateral relations.

He also expressed his gratitude to China for its strong support in Kuwait's fight against COVID-19, hoping that Kuwait and China strengthen cooperation in such areas as healthcare, food security, education, information technology, artificial intelligence and cyber security.

He added that Kuwait is willing to actively participate in the construction of China-Arab States Cooperation Forum and hopes to strengthen dialogue and cooperation with China on African and Asian affairs.