SUVA, Aug. 16 (Xinhua) -- Climate change is a challenge to all humanity that requires the cooperation of the international community and China stands ready to work with Pacific island countries to deal with climate change, a Chinese special envoy said on Friday. 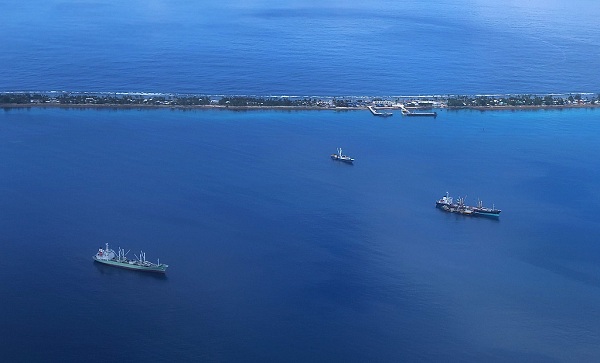 The foreign fishing motherships wait in the lagoon for their catch on August 15, 2018 in Funafuti, Tuvalu. (File Photo: VCG)

Speaking at the 31st forum dialogue partners meeting in Funafuti, capital of Tuvalu, Wang Xuefeng, special envoy for the China-Pacific Islands Forum (PIF) Dialogue said that developing countries all suffer from climate change. In particular, Pacific island countries and other small island countries bear the brunt of it. The Chinese government's effort to deal with climate change is not only driven by China's domestic needs for sustainable development, but also by its sense of responsibility of forging a community with shared future for mankind.

With such a strong sense of responsibility, China works for an equitable global climate governance regime that is cooperative and beneficial to all, and takes concrete policy measures to strengthen domestic efforts in combating climate change, thus becoming an important participant, contributor and torchbearer in the global endeavor for ecological improvement, he said.

He said that as the largest developing country in the world, China always attaches great importance to the special concerns and legitimate demands of small island countries in combating climate change.

"China believes that to better deal with climate change, we must strengthen the implementation of the United Nations Framework Convention on Climate Change and the full and effective implementation of the Paris Agreement. Developed countries should earnestly carry out their obligations set in the Convention and the Agreement, including providing sufficient support in terms of finance, technology and capacity-building to small island countries and other developing countries to help them increase their capacities in combating climate change," he said.

"China firmly upholds the principles and framework of the Convention, and remains committed to the principles of equity, 'common but differentiated responsibilities' and respective capabilities. We are working with various sides to advance the follow-up negotiation on the details of the Paris Agreement, and for the full, effective and sustained implementation of the Convention and the Agreement."

The special envoy pointed out that over the years, China has been providing assistance within its capacity to Pacific island countries through South-South cooperation to help them improve their capacities in combating climate change, he said, adding that China will also step up its efforts to make positive contribution to the sustainable and green development of Pacific island countries and jointly rekindle confidence in global cooperation against climate change.

The 31st forum dialogue partners meeting is part of the 50th PIF meeting which concluded in Funafuti on Friday.

During the meeting with the theme of "Securing Our Future in the Pacific," the PIF leaders mainly discussed the issues such as climate change, economic development, maritime security and marine pollution.

Founded as an inter-governmental organization in 1971, PIF aims to enhance cooperation between countries and territories of the Pacific region.