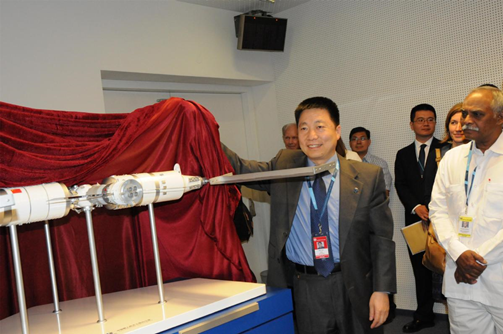 China is accelerating its timetable for a space station, with the core capsule expected to be launched in 2020, says Yang Liwei, director of the China Manned Space Engineering Office and the country's first astronaut.

Yang told Chinese media recently that the two experiment modules of the space station will be sent into space in 2021 and 2022. Three or four manned missions and several cargo spacecraft are planned in 2021 and 2022.

After construction of the main parts of the space station, a capsule holding a large optical telescope will be sent into the same orbit to fly with the station, Yang said.

During construction of the station, the number of manned space missions will rise to about five a year, compared with once every two or three years when China began sending astronauts into space more than a decade ago. Astronaut recruitment will be expanded.

Born in Suizhong county, of Huludao city, Northeast China's Liaoning province, in 1965, Yang has the rank of major general. He became China's first astronaut when he went into space aboard the Shenzhou V craft on Oct 15, 2003.

"Every second of that day was totally new to me. Nothing can surpass that stunning memory," Yang recalled.

China drew up a manned space flight plan code named "Dawn Project" in the 1970s, but lacked the economic and technological conditions to implement it.

In 1986, the State Council listed space technology in a high-tech development plan. In 1992, China launched its manned space flight program. The success of Shenzhou V made China the third country to acquire manned space travel technology on its own.

Yang said he could only eat prepared food like moon cake when he was aboard Shenzhou V. But when Shenzhou XI carried Jing Haipeng and Chen Dong to China's first space lab Tiangong II in 2016, the two astronauts chose more than 100 kinds of food for their one-month stay.

Yang likened Shenzhou V to a tractor and Shenzhou XI to a limousine.

China has become a major power in space, but still lags behind the leading powers, Yang said.

China's reform and opening up over the past four decades have emancipated mindset, promoting economic growth and enhancing comprehensive national strength. The past 20 years have witnessed the rapid development of its space industry, Yang said.

Exploration of the unknown is the impetus of human advancement. Many technologies first developed during space exploration are later used to benefit ordinary people, such as CT or MRI for medical use, Yang said.

"I'm expecting more resources for the development of the space industry. China's space station will be a platform for more advanced space science experiments to serve economic and social development on Earth," Yang said.