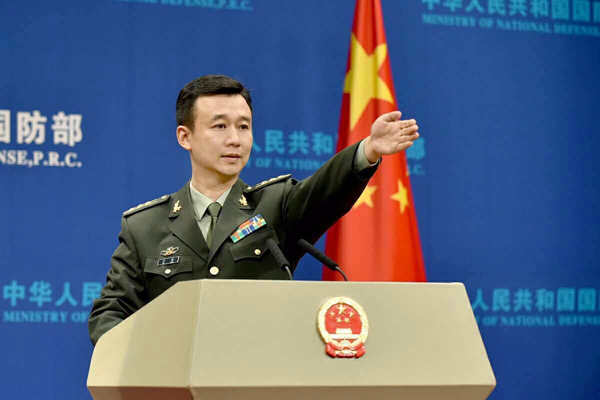 A Chinese military spokesperson on Tuesday reaffirmed the country's commitment to the path of peaceful development and criticized Japan for hyping up the so-called "China threat."

Wu Qian, spokesperson for China's Ministry of National Defense, made the remarks in response to a query about the Defense of Japan 2022 white paper released by Tokyo last week.

Wu said the white paper disregards facts and is full of prejudices, adding that it deliberately plays up the so-called "China threat" and grossly interferes in China's internal affairs.

China expresses strong opposition to it and has lodged strong representations to the Japanese side, he said.

China is committed to the path of peaceful development, and follows a defense policy that is defensive in nature and a military strategic guideline of active defense, he said.

China's defense building is aimed at upholding its sovereignty, security and development interests, and better providing public security products to the international community, he stressed.

The spokesperson criticized Japan for its attempts to revise its pacifist constitution, substantially increase its defense budget and develop offensive capabilities.

Wu stressed that the Taiwan question is purely China's internal affair that brooks no foreign interference. The Diaoyu Islands and their affiliated islands have always been part of China's territory, he said. China has indisputable sovereignty over islands in the South China Sea and their adjacent waters, he added.

The Chinese military has the resolve, capability and confidence to defend the country's sovereignty and territorial integrity, safeguard its maritime rights and interests, and maintain peace and stability in the region, he said.

Wu urged Japan to reflect on its history of aggression, stop erroneous words and deeds on relevant issues, and earn the trust of its Asian neighbors and the international community with concrete actions.