China rebukes West for questioning impartiality of WHO's origin-tracing mission 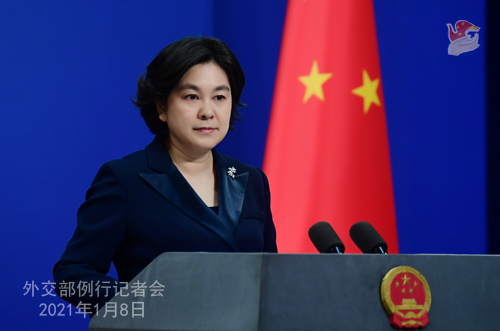 China on Thursday rebuked some Western politicians and media for accusing that China did not cooperate with the WHO’s coronavirus origin-tracing mission.

Noting WHO experts stated that they have gone where they wanted to go, met everyone they wanted to meet, received important new data and learned more about the route of virus transmission, Hua Chunying, the spokesperson of China’s Ministry of Foreign Affairs, said “Many WHO experts have stated that some Western media reports on China’s refusal to share raw data are inconsistent with their experience.”

Real independence did not mean obeying the Western presumption of guilt against China, Hua said at a regular press conference.

Only by respecting science and facts can independent reports and scientific conclusions be produced, she said. The statements of some Western politicians were just another example of political interference in science.

Hua pointed out, according to US media, in July 2019, an unexplained respiratory disease appeared in northern Virginia, and a large-scale e-cigarette disease broke out in Wisconsin.

In the same month, the US Centers for Disease Control and Prevention (CDC) required the research base at Fort Detrick to terminate most operations.

Then the base was subsequently announced closed. In March 2020, the director of the US CDC publicly admitted that some of the influenza deaths in the US in the fall of 2019 may actually have been infected with COVID-19, Hua said.

Reports also showed that COVID-19 was already present in blood samples donated by some Americans in December 2019.

When a reporter quoted US National Security Advisor Jake Sullivan saying that the WHO expert group report must be independent and China must provide all the original data at the beginning of the epidemic, Hu responded by questioning, “Can the US provide all the relevant raw data? Can the US carry out comprehensive and full cooperation with the WHO? Can the US invite WHO experts to conduct traceability investigations and draw independent conclusions?”

Hua stressed that China hopes that relevant countries could also take an active, scientific and cooperative attitude to carry out global virus traceability, share the results of exchanges and research, and jointly assume their due responsibilities and obligations for international anti-epidemic cooperation.