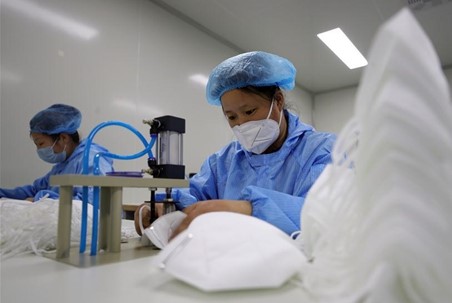 China suspended exports of six types of medical supplies such as face masks, gowns, test kits, and ventilators through market procurement in a move to ensure export quality effective on Sunday, the Yiwu bureau of commerce said on its WeChat public account.

Market procurement trade mainly covers the exports of small amounts of products, and it offers faster customs clearance, more convenience and a waiver of value-assed tax. It mostly deals with small commodity exports, while general trade is more regulated and supervised and therefore quality can be guaranteed.

Yiwu in East China's Zhejiang Province was one of the first pilot cities to use the new type of trade starting in 2013. In 2018, the pilot program was expanded to a handful of export ports in provinces including Central China's Hunan, South China's Guangdong and Southwest China's Sichuan.

A source close to the Yiwu government told the Global Times on Sunday that the new policy will only have a slight impact on Yiwu exporters as they seldom export medical products via the new channel.

On Sunday, the General Administration of Customs (GAC) released a list of companies whose medical products for export failed to meet export standards, involving 16 companies and more than 1.86 million face masks.

According to the GAC, companies whose products are found to be damaged or beyond their expiration dates, or that have quality issues, will face legal penalties and a ban on future exports.

A manager of a Chinese import and export firm surnamed Chang told the Global Times that he supported the government's move to ferret out manufacturers of poor-quality medical products, which will help the global fight of COVID-19.

"I barely engage in exporting medical products now because I want to maintain a good image in front of my clients. If our clients ask, I recommend that they buy from manufacturers with certified qualifications in China," Chang said, noting that only a small number of domestic companies are producing substandard products.

On March 31, the GAC, Ministry of Commerce and State Administration of Market Regulation released a new set of rules to regulate medical products exporting market.