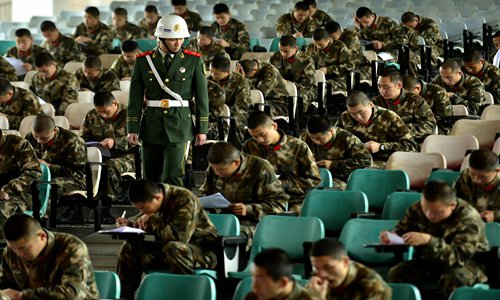 An officer of the People's Armed Police from the Border Garrison Corps in South China's Guangdong Province invigilates an examination for newly-recruited soldiers on March 6. Photo: VCG

China has revised a regulation on civilian personnel in the military in a bid to attract more talented people to work for the country's armed forces. The revised regulation, made public on Friday, was jointly issued by the State Council and the Central Military Commission (CMC). With 11 sections and 62 articles, the regulation states the duties, statuses, assignments and treatments of relevant personnel. According to the revision, ''civilian personnel'' in the military refers to those who work in management or professional technical posts and are not in active service. They will perform their duties of civilian positions in peacetime and will work in active service if necessary, the regulation said. Regulation stipulationsThe State Council and the CMC first issued a regulation on the issue in 2005. "The revision of the regulation aims to expand the scope of posting civilian personnel, optimize the personnel structure, save human resource costs and attract more talented people to the military," according to a statement issued by the military and civilian personnel bureau under the CMC Political Work Department. The revised regulation is also expected to help build a high-quality and professional talent pool within the military, it said. Noting that it is a common practice among modern armies to actively recruit civilian staff, the statement said China needs to improve its civilian personnel institutions to better optimize the structure of its military force. It also said the revision was meant to solve problems of human resource policies regarding civilian personnel, such as understaffing, unscientific management, unclear career paths and unattractive salaries and welfare, all of which had resulted in difficulties in recruiting and retaining high-level personnel for the military. "The reform will break institutional barriers, promote civilian-military integration and provide good channels and a platform for outstanding people, including academic, technological and management elites, to work for the country's military," the statement said. "With clear stipulations regarding the civilian personnel's status, selection and promotion, career development and fostering and management systems, the revised regulation will reshape the civilian personnel system," it said, stressing the principle of Party leadership and the standard of capabilities to win wars. The statement said drafters of the revision had visited relevant military units, military authorities as well as central Party and governmental agencies to solicit opinions to make sure the revision had pooled the knowledge and consensus of various parties. According to the regulation, channels to recruit and select civilian personnel for the military should be expanded and the procedure should be conducted according to strict standards. "Civilian personnel should be included in the training system of all military personnel and the assessment system for their political and professional performances should also be improved," the document said. Requirements regarding ideological and political education, organization, confidentiality, overseas visits and archives for civilian personnel are the same as those prescribed for soldiers and officers in active service. Improved recruitment processThe regulation also stated policies on the removal and dismissal of staff. It further said "special measures" were allowed in the selection, assignments and treatment of certain civilian personnel in cases when high-level or special elites were urgently needed.  The People's Liberation Army (PLA) Army branch initiated its national recruitment process of civilian personnel late in February 2016, marking the first recruitment after the PLA Army general command was formed, the PLA Daily reported in March 2016.The report said more than 300 candidates have been selected through written tests and interviews and were waiting for further examinations.Among the 800 interviewees, 45 percent had a bachelor's degree or above and 32 percent graduated from key national universities.According to the recruitment authority, the army has taken advantage of information technology to ensure an open and fair exam. For example, a computer program designed to choose interviewers and assign questions from databases at random has been used during interviews.