The Chinese Embassy in Turkey refuted claims made by Turkey's foreign ministry regarding the alleged death of a Uyghur musician, claiming the man is still alive and in good health. 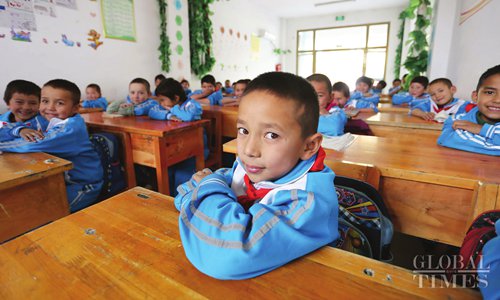 The embassy also strongly opposed accusations from Turkey on Xinjiang's vocational education and training centers, saying the accusations are "contrary to the facts" and were made up "out of thin air."

A spokesperson from the Chinese Embassy in Turkey said in a statement on Sunday that Heyit, 57, who had been an actor with the Xinjiang Art Theater Song and Dance Troupe, is still alive and in good health. The embassy said Heyit was arrested according to the law on suspicion of endangering national security.

The Chinese government maintains basic rights of people of all ethnic groups in Xinjiang, the spokesperson said.

"What needs to be emphasized is that the right to life is the basic human right, and terrorism and extremism severely threaten that right, and the safety of all people in Xinjiang," the embassy spokesperson said.

The Chinese embassy has asked the Turkish foreign ministry to withdraw its false accusations and take measures to eliminate their bad influence.

The vocational education and training centers are not "concentration camps," as the Turkish side alleges and their core objective is to counter terrorism and extremism, the spokesperson said.

The establishment of the vocational education and training centers unite, educate and save the vast majority of people who commit illegal or minor crimes from becoming victims of terrorism and extremism, the statement reads.

The embassy's statement maintains that the centers are open to the public and China has invited envoys and journalists from 12 countries including Turkey to visit them.

"The journalists who were invited to Xinjiang wrote objective reports but the reports were ignored by some people. All I can say is they are with prejudice or have other motives," the Chinese spokesperson said.

Since the establishment of the education and training centers, there have been no violent terrorist incidents in Xinjiang for more than 25 months, and security situation has greatly improved, the embassy noted.

It's extremely irresponsible, unfounded and ridiculous to describe a living person as a dead one, Hua said. She said she saw Aksoy’s video online yesterday, proving he is still alive and in good health.

It has been seen and reported that the Chinese government has implemented supportive strategies in combating terrorism, accelerating economic development, enhancing education and so on, which is wise and deserves to be studied. People in Xinjiang now are living in happiness and safety, which can be proved by many foreign media visiting there, including Turkish media, Hua said.

All ethnic groups in Xinjiang can enjoy full freedom of religious belief, the right to use ethnic languages and other cultural rights in accordance with law, Hua added.

China’s efforts on the unity, friendship and harmony of all nationalities should not be maliciously maligned with a prejudiced attitude. Turkey is also a multinational country facing the threat of terrorism, and China hopes that Turkey can understand China’s relevant policies and take practical actions to enhance mutual trust and cooperation between China and Turkey.

In 2017, Xinjiang received more than 100 million domestic and foreign tourists, up 32 percent. The number of tourists in 2018 exceeded 150 million, an increase of 50 percent. These figures fully demonstrate that Xinjiang is safe and stable.

(With inputs from Global Times)