BEIJING, March 18 (Xinhua) -- China said on Monday that it resolutely opposes the unwarranted US accusations on China's human rights issue and has lodged solemn representations to the US side. 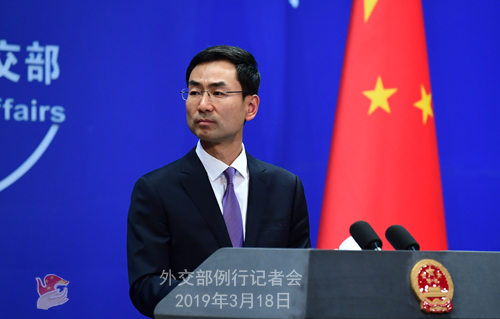 During the presentation of the annual US State Department report on human rights, US Secretary of State Mike Pompeo said last Wednesday that China's human rights abuses "is in a league of its own."

"The Chinese people have the most say, and our achievements are obvious to the majority of the international community," Foreign Ministry spokesperson Geng Shuang said during a news briefing.

He said China completed its 3rd UN Human Rights Council Universal Periodic Review (UPR) process last Friday. During the meeting, head of the Chinese delegation and Vice Foreign Minister Le Yucheng elaborated the development path, concept and practice of human rights with Chinese characteristics, and introduced the progress on the 30 measures China had announced to further promote human rights development during the UPR. Le also responded to issues including those concerning Xinjiang.

The meeting had positively evaluated China's achievements in human rights and appreciated China's participation in the review with openness, confidence and frankness, said Geng.

China has decided to accept 284 out of 346 recommendations put forward by various parties during the review that are in line with China's national conditions and conducive to the development of China's human rights. Geng said this fully demonstrates China's determination to safeguard and promote human rights, and also showcases that the Chinese people are convinced of their promises.

"One country in particular has withdrawn from the UN Human Rights Council, has a notorious human rights record and has pointed fingers at other countries' human rights situation year after year. It should be aware that the majority of the international community disliked its words and deeds," said Geng.

"I hope this country can seriously reflect on its behavior, handle human rights issues and conduct human rights dialogue and cooperation with the right attitude," Geng said.