A spokesperson for the Commissioner's Office of the Chinese Foreign Ministry in the Hong Kong Special Administrative Region (HKSAR) on Wednesday firmly refuted and strongly condemned allegations made by some Western politicians concerning the decision by the Standing Committee of the National People's Congress (NPC) on the qualifications of the members of the HKSAR Legislative Council.

The so-called Inter-Parliamentary Alliance on China, which includes politicians from Australia, the United States, Canada and Germany, condemned the move, saying it would end the "One Country, Two Systems" in the HKSAR. 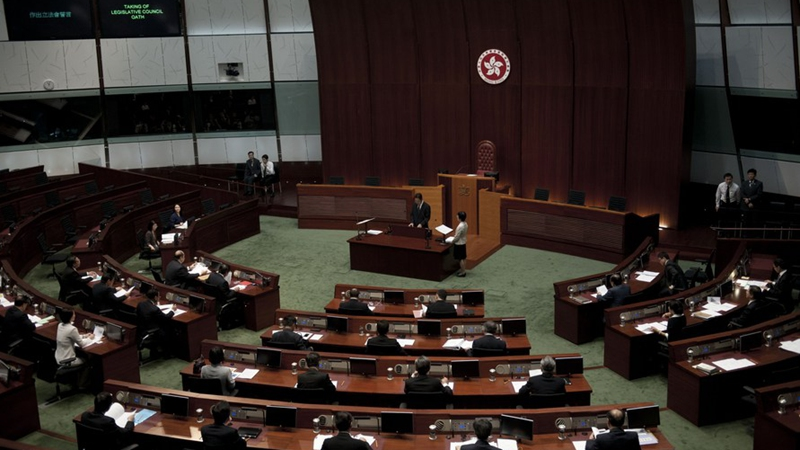 The Foreign Ministry's Commissioner's Office said the NPC's decision is reasonable, legitimate and necessary to safeguard the enduring success of "One Country, Two Systems," and rejected such external interference.

It is an international common practice to require an oath of allegiance, set out the qualifications of legislators and ensure their national identity and political loyalty through legislation, it said.

No country will ever allow holders of public office, legislators included, to breach their oath and betray their countries, it continued.

Loving both the country and the HKSAR is a basic requirement of the Constitution and the Basic Law, and an ethical principle every public office holder in the HKSAR shall adhere to, it said.

A handful of members, however, have unscrupulously disrupted the Legislative Council and obstructed normal operation of the HKSAR's political system and government function, in defiance of their oath of allegiance, rules and law, it noted.

They even refused to acknowledge China's exercise of sovereignty over the HKSAR and its constitutional status as a local special administrative region of China, lobbied foreign countries to impose sanctions on the HKSAR, and willingly acted as the pawns of foreign forces, it added.

The evidence is solid and undeniable that they have pit themselves against "One Country, Two Systems" and the Basic Law. Therefore, it is only just and necessary to disqualify such lawmakers in accordance with the law, it said.