CHINA China regrets but not responsible for cancelling of IADB meeting: FM spokesperson

China regrets but not responsible for cancelling of IADB meeting: FM spokesperson

BEIJING, March 26 (Xinhua) - China regrets the cancelling of the annual meeting of the Inter-American Development Bank (IADB), but the responsibility does not lie in China, a Foreign Ministry spokesperson said Tuesday. 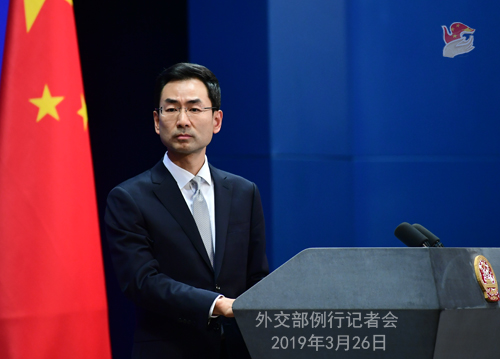 Some countries insisted on manipulating the issue of Venezuela and tried to force the participation of Juan Guaido's representative, and as a result, the meeting could not be held as planned, spokesperson Geng Shuang told a press briefing.

A few countries continued to stir up the sensitive political issue of Venezuela, rushed into recognition of the new representative appointed by Guaido shortly before the annual meeting amid substantial divergence between IADB members, and insisted on his attendance at the meeting, he said.

Geng reiterated China's stance on the Venezuelan issue that all parties should adhere to the purposes and principles of the United Nations Charter, abide by the norms of international law and international relations, and refrain from interfering in Venezuela's internal affairs.

Although the representative appointed by Guaido had passed the voting procedure of the IADB, "Guaido himself is not a president who has been elected through legal procedures, and lacks legitimacy, which makes it difficult for China to allow his representative to attend the meeting in China," Geng said.

"Changing Venezuela's representative at the IADB will not help solve Venezuela's problems. Instead, it damaged the atmosphere of the IADB annual meeting and disturbed preparations for the meeting," Geng said.

"In order to ensure the holding of the meeting, China had demonstrated its prudent attitude toward the participation of the Venezuelan representative, put forward reasonable solutions, maintained in-depth communication with relevant sides and called on them to bear in mind the original intention of the meeting and avoid politicizing it.

"This is an act of assuming responsibility."

The IADB's 60th annual meeting was originally planned for March 26 to 31 in Chengdu, capital city of southwest China's Sichuan Province. China had attached great importance to and made a lot of preparations for hosting the meeting, Geng said.

As a meeting of the financial industry, it should focus on financial cooperation and should not be disrupted by controversial political issues, Geng said, adding that most of the IADB members agreed with China's proposition and were very clear about who thwarted the holding of the meeting.

"China believes that its cooperation with the IADB and Latin American countries will not be disturbed, and we have full confidence in strengthening cooperation in the future," the spokesperson added.