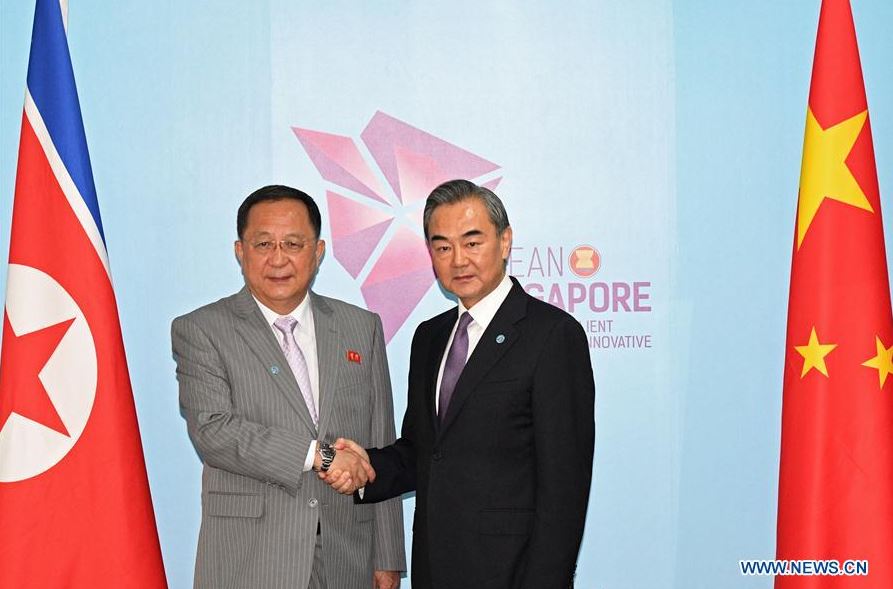 Wang made the pledge while meeting separately with foreign ministers of the Democratic People's Republic of Korea (DPRK) and South Korea on the sidelines of the Association of Southeast Asian Nations (ASEAN) foreign ministers' meeting and related meetings.

While expressing appreciation for the DPRK's efforts in promoting the denuclearization process of the Korean Peninsula and improving its ties with the Unites States, Wang said the Chinese side hopes that the United States will take the DPRK's legitimate concerns seriously and meet the DPRK half way.

China is willing to maintain communication and cooperation with all parties to jointly push forward the denuclearization process, so as to achieve lasting peace and stability on the peninsula at an early date, Wang said.

Ri Yong Ho praised the "blooming" traditional friendship between the DPRK and China, noting that the 70th anniversary of their diplomatic ties next year will be an opportunity to open up a new chapter in bilateral ties.

He underlined the important role China has played in safeguarding the stability on the Korean Peninsula and pushing forward the denuclearization process, adding that the DPRK is willing to maintain strategic communication with China and together guard the stability and development in the region.

On the issue of the Korean Peninsula, they agreed that the detente on the peninsula is the hard-won result of all parties' efforts and should be valued and carried on with continuous efforts.

They pledged support for the United States and the DPRK to maintain contacts and dialogue, enhance mutual trust, earnestly implement the consensus reached during their leaders' meeting in Singapore in June, so as to further advance the denuclearization process to achieve peace and stability on the Korean Peninsula.