China’s Foreign Ministry on Tuesday rejected the idea that China should participate in a new nuclear disarmament agreement if the US and Russia fail to maintain the Intermediate-Range Nuclear Forces (INF) Treaty. 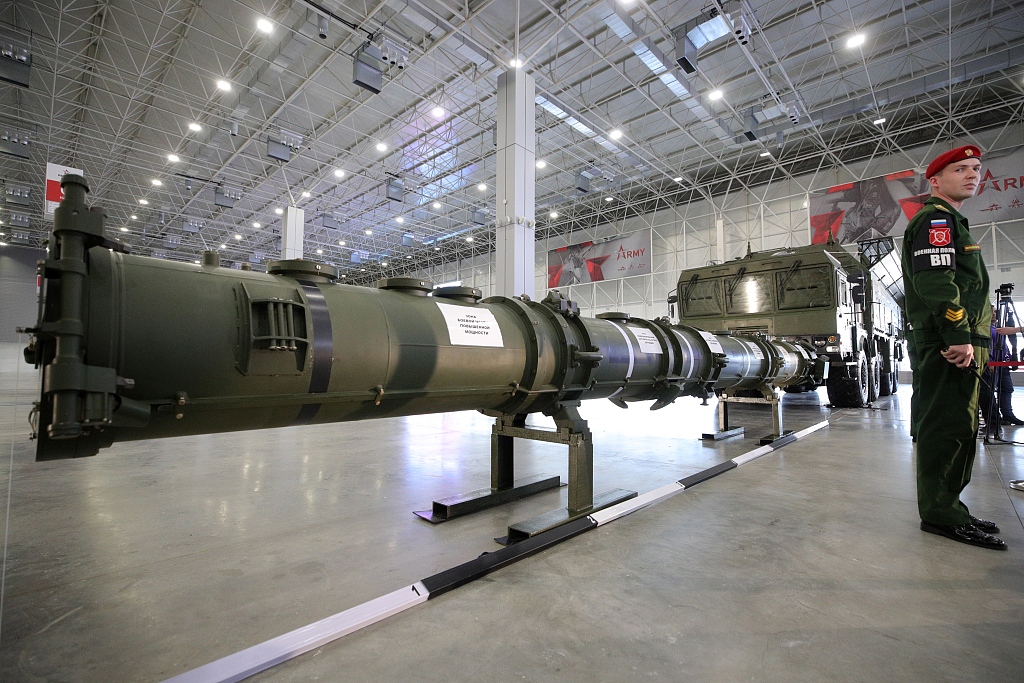 The 9M729 missile demonstrated after a briefing for military attaches and international media by the Russian Defence Ministry at the Patriot Congress and Exhibition Centre in Kubinka, Moscow Region. (File photo: VCG)

The INF is a bilateral treaty only binding to the US and Russia, and it is unreasonable for the US to point to other countries when it leaves the treaty unilaterally, said spokesperson Hua Chunying at a regular briefing.

Hua made the remarks when answering a question about the proposal by Japanese Foreign Minister Taro Kono suggesting a “new multilateral structure capacity” be built for the world’s nuclear powers. US Secretary of State Mike Pompeo said he hoped China could join the US-Russian dialogue regarding the fate of the INF Treaty.

The US and Russia signed the INF treaty in 1987, which stipulates that the two countries no longer hold, produce or test land-based ballistic and cruise missiles with ranges between 500-5,500 kilometers (around 310-3,420 miles).

The US announced its pulling out of the INF treaty effective February 2. China called the move “regrettable” and expressed opposition to the multilateralization of the INF Treaty.

“What is imperative at the moment is to uphold and implement the existing treaty instead of creating a new one,” said Geng Shuang, the spokesperson for China's Ministry of Foreign Affairs, after the US announced its withdrawal.

Debunking the suggestion as “nothing new” and “unhelpful” for upholding the current treaty, Hua said it serves merely as an excuse for Washington’s unilateral withdrawal. Hua urged the US to return to the deal and create conditions for other countries to participate in nuclear disarmament talks.

The US remains the world's largest nuclear weapons holder and has a special responsibility for nuclear disarmament, Hua said.

“The real purpose of the US withdrawal is to evade its responsibility,” Hua said. “If Japan really cares about regional security, it should persuade US not to quit the treaty.”

Reiterating China’s adherence to peaceful development, Hua said China maintains a very small nuclear arsenal, and it follows the policy of self-defense and minimum deterrence, and poses no threat to other countries.