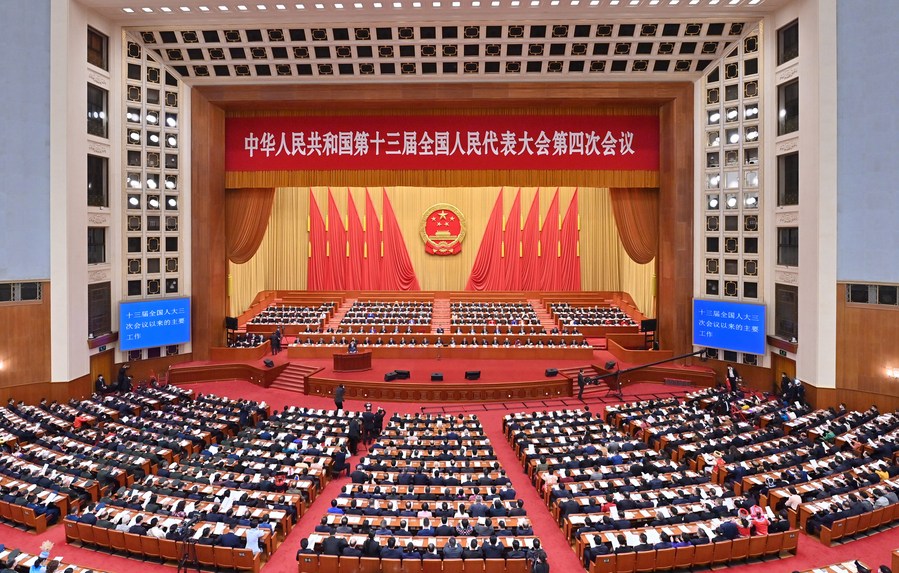 The second plenary meeting of the fourth session of the 13th National People's Congress (NPC) is held at the Great Hall of the People in Beijing, capital of China, March 8, 2021. (Photo: Xinhua)

BEIJING, March 14 (Xinhua) -- The full text of the work report of the Standing Committee of the National People's Congress (NPC) delivered by the committee's chairman Li Zhanshu on March 8 and approved Thursday at the fourth session of the 13th NPC was released via Xinhua News Agency on Sunday.

The report reviews the NPC Standing Committee's work since the third session of the top legislature last year in six aspects:

I. Strengthening the implementation of the Constitution and oversight of constitutional compliance to safeguard the integrity of the rule of law;

II. Strengthening legislation in key areas to meet the expectations of the people while centering on the overall work of the Party and the country;

III. Conducting oversight of legal compliance and work performance in accordance with the law, thus providing support through oversight;

IV. Upholding the principal position of deputies and supporting and assisting them in the law-based performance of their duties;

V. Effectively leveraging the NPC's function and role in foreign relations in the service of the country's overall diplomatic work;

VI. Working to strengthen the Standing Committee's capacity to perform its functions through constant self-improvement.

The report lays out the NPC Standing Committee's main tasks for the coming year as follows:

II. Strengthening legislative work in key areas and continuing to improve the quality and efficiency of legislation;

III. Strengthening oversight to ensure that state departments fulfill their duties in accordance with the law;

IV. Taking solid steps to strengthen work related to NPC deputies to give full play to their role;

V. Deepening and expanding exchanges and cooperation at all levels and across all fields in an effort to strengthen the NPC's work on foreign affairs;

VI. Intensifying self-improvement efforts in order to lay a solid theoretical, political, and organizational foundation for the effective performance of duties.