CHINA China remains firm on trade talks with US

China remains firm on trade talks with US 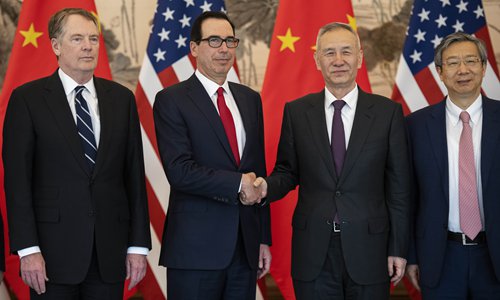 China's Vice Premier Liu He (2nd from right) shakes hands with US Treasury Secretary Steven Mnuchin (2nd from left) while posing for a group photo at the Diaoyutai State Guesthouse in Beijing on Friday. Top negotiators from China and the US concluded their trade talks on Friday. （Photo: AFP）

China on Thursday struck a balanced and cautious tone over trade talks with the US, as officials expressed willingness to engage with US officials on equal footing following a phone call between leaders of the two countries, but also remained firm on matters of principle.

While recent positive signs have lifted market sentiment and hopes for a resolution to the costly trade war, the outlook for the two sides to find a quick resolution remains bleak, given the continued US bullying tactics and increasingly clear intention to contain China's economic and technological rise, Chinese analysts noted. At a press briefing on Thursday, Gao Feng, a spokesperson for the Chinese Ministry of Commerce, said that top negotiators from both sides will follow up on the consensus reached by the leaders of the two countries during a phone call to keep communicating and will prepare for an upcoming meeting between them.On Tuesday, Chinese President Xi Jinping spoke with US President Donald Trump, at the request of the latter, and they agreed to meet on the sidelines of the G20 summit to be held in Japan later this month. Global financial markets welcomed the move, with stocks in China, the US and elsewhere rallying. On Thursday, the Shanghai Composite Index gained 2.38 percent, while the smaller Shenzhen Component Index surged 2.34 percent."This is a positive sign because it shows both sides are at least willing to meet and talk about it," Li Yong, deputy chair of Beijing-based Expert Committee of the China Association of International Trade, told the Global Times on Thursday. But he said recent US actions have made it very difficult for both sides to reach a reasonable agreement.Since trade talks broke down last month, the US has adopted a maximum pressure approach with China, increasing tariffs on $200 billion in Chinese goods, blacklisting Chinese telecom Huawei and threatening to slap tariffs on about $300 billion in Chinese goods.

Firm positionAt the press briefing on Thursday, Gao harshly criticized the US "unilateral" actions and urged the US to stop its "wrongful actions" to create a "good atmosphere" for trade talks. "Threatening each other with a trade war and constantly imposing tariffs will not solve the problem," he said, stressing that China's principles and stance in the trade talks are "persistent and clear," and China's core concerns must be addressed.Chinese officials have publicly drawn three bottom lines for any trade deal: First, the US must remove all tariffs; second, the US demand for purchases should be realistic; and third, China's dignity and sovereignty must be respected in a potential deal.Unless the US gives clear concessions over these principles, particularly with regard to tariffs, a trade agreement will be highly unlikely, according to Huo Jianguo, vice chairman of the China Society for World Trade Organization Studies."Overall, I think it is very difficult, because there is a slim chance that the US would made adjustments and concessions, and China's bottom lines are also not to be crossed. If the two sides keep this way, the meeting will lead to nowhere," Huo told the Global Times on Thursday, noting that the ball is in the US court. Even after the Tuesday phone call, US officials have continued with tough rhetoric and actions against China. At a US Senate hearing on Tuesday, US Trade Representative Robert Lighthizer suggested that talks and even tariffs alone might not work, Reuters reported. The US also appears to be moving forward with additional tariffs on $300 billion worth of Chinese goods by holding a public hearing, despite widespread opposition from hundreds of US businesses.Such actions from US officials have added to China's quickly evaporating patience and trust with the US, and further confirmed China's realization that the real US intention is to contain China's economic and technological rise rather than address trade issues, analysts said."After this round of clashes, we should be clearer about the future path of our own development, and though there is still the possibility of cooperation, we must also consider going it alone," Li said.