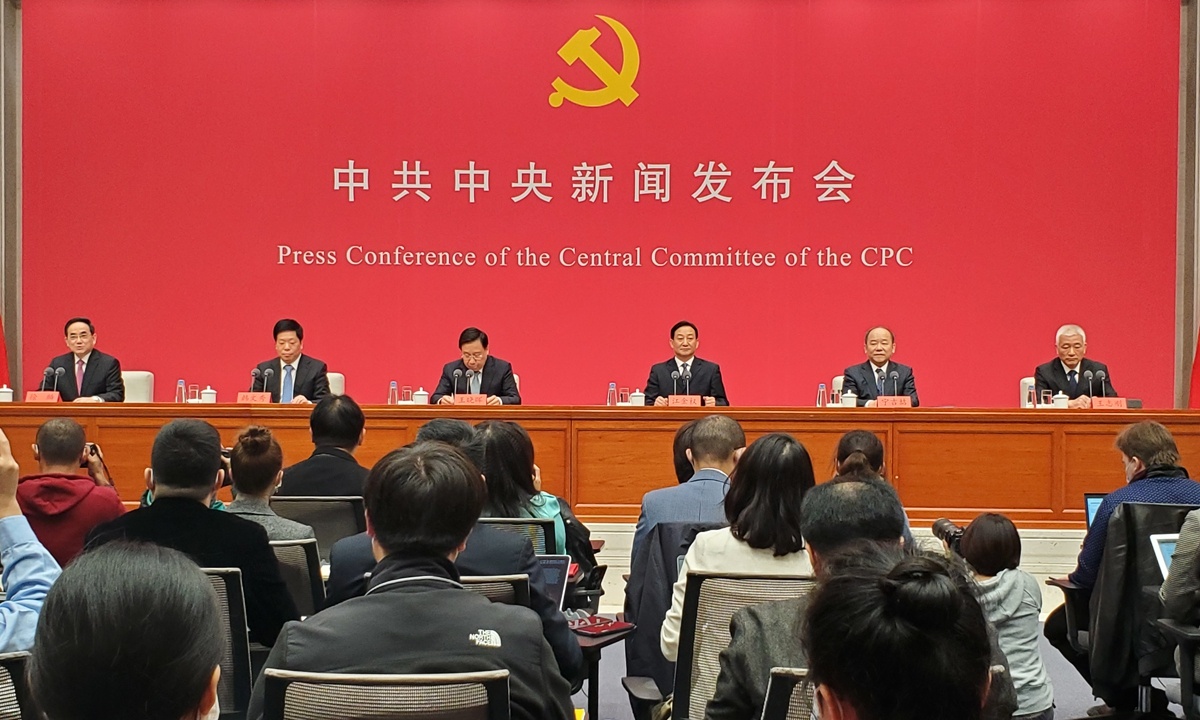 Chinese officials reiterated Friday that the country's long-standing opening-up policy will remain intact, although it would adopt new development strategies that put heavy emphasis on boosting the domestic market and pursuing indigenous innovation in the next five to 15 years.

At the first ever press conference held by the Communist Party of China (CPC) Central Committee, senior officials addressed questions about the recently concluded fifth plenary session of the 19th Central Committee of the CPC and the country's 14th Five-Year Plan (2021-25) and long-range targets trough the year 2035, and discussed the reasons behind the strategies.

The officials described a profound steadiness, perseverance as well as adaptability of the CPC Central Committee's decision-making process, in spite of a chaotic world mired in a global pandemic and rising trade and geopolitical tensions. That vivid dynamic underscored the systemic strength of the CPC's governance that would ensure the country remains on track to become a modern socialist power, experts noted.

Among the popular topics at the press conference were two of China's new development strategies outlined in the 14th Five-Year Plan, and the long-term target through the year 2035: the "dual circulation" model (with a focus on domestic demand) and the innovation-driven core national strategy (which calls for major breakthroughs in core technologies). Both strategies have been widely discussed domestically and globally as a major shift in the path of the world's second-largest economy.

Asked whether the new development strategies were a result of international pressure and whether they would result in the downgrade of China's opening-up policies, Han Wenxiu, deputy director of the Office of Central Commission for Financial and Economic Affairs, said that "dual circulation" does not mean "only domestic circulation," and that China will continue to open up its market at a higher-level to foreign businesses.

"No matter how the international situation changes, we will never waver in our basic national policy of opening-up," Han said. "This is a move out of China's own initiative, not a forced response; it is a long-term strategy, not a matter of expediency."

In the 14th Five-Year Plan's outline as provided in a communiqué following the closing of the four-day plenary session on Thursday, innovation has been elevated to a core position in China's modernization and technological self-reliance, and will be viewed as a strategic supportive force for China's development.

Against the backdrop of an intensifying technology war between China and the US, in which the US has relentlessly pushed for a crackdown on Chinese tech companies, the emphasis on technological independence also sparked speculation that China might turn inwards in terms of innovation.

However, in light of new challenges, China will "improve its capacity for independent innovation and run its own affairs because key core technologies cannot be purchased or acquired," Wang said.

In response to a more pointed question about China-US decoupling, Han said that a "complete decoupling is unrealistic" and would do no good for the US, China and the world.

Wei Jianguo, a former Chinese vice minister of commerce, said that the new strategies are not only the best for the Chinese economy because they took into account both domestic and global challenges, but also good for foreign businesses and the global economy.

"[The strategies] show that China's ability to execute economic policies remains strong and that would significantly improve foreign investors' expectations," Wei, who is an executive deputy director of the China Center for International Economic Exchanges, told the Global Times on Friday.

The ability of the CPC Central Committee, the highest decision-making body of the Party, to not just formulate but also execute and articulate sweeping economic and social policies was also on display at the press conference on Friday.

Inside the briefing room of the Information Office of the State Council in Beijing, the shining red backdrop with the CPC's gold sickle-and-hammer emblem was a rare sight for many, and a reminder of the fact it was the first time the CPC Central Committee has held such a press conference, which, an official said, is part of a new mechanism for information dissemination.

"Establishing the mechanism of information dissemination for the CPC Central Committee… is an important institutional arrangement and systemic innovation to improve the CPC's ability to govern the country," Xu Lin, director of the State Council Information Office, said at the press conference.

Also underscoring the Party's effective governance is the continuation of a major feature of China's governance system since the 1950s - setting five-year plans to coordinate policies and development targets across various sectors and make policies in accordance with those goals.

Unlike in the West, where politicians often make their own self-interested, shortsighted policies, China's five-year plans mostly focus on comprehensive and sustainable growth that benefits - and will continue to benefit - all its people, analysts pointed out.

"In areas related to the country's development and people's livelihood, the Party's powerful leadership could dispatch all forces, effectively distribute resources and gather the strength to implement these big projects related to 1.4 billion population. That is an advantage we have over the West," Zhu Lijia, a professor of public management at the Chinese Academy of Governance, told the Global Times on Friday.

Given the special significance of the 14th Five-Year Plan and long-range targets for 2035 in China's long-term goal of achieving the great rejuvenation of the Chinese nation by 2050, the formulation process saw unprecedented participation from top leaders to ordinary citizens, officials said.

President Xi Jinping headed the task force for the drafting of the plan and personally oversaw the draft process, according to Han. Over a million comments were also received from the public and were turned into about 1,000 suggestions for the plan, he said.

"These plans and goals, drafted by the Party, are not just guiding principles for China's social and economic development, but also a guarantee and basis for the orderly development of China," Zhu said. "Adhering to the Party's leadership and socialism is the biggest political and institutional strength of China."