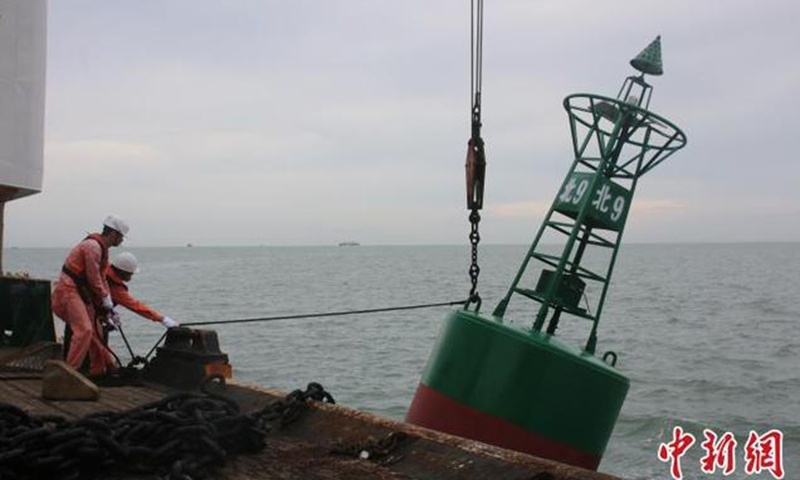 China has replaced all its navigation markers in the Qiongzhou Strait between South China's Hainan and Guangdong provinces with new BeiDou telemetry and remote control equipment. Netizens and observers hail the move as a further step in boosting Hainan's free trade port development and defense of China's national security.

The replacement of the last two navigation markers was witnessed and under guidelines from Ministry of Transport South China Sea Navigation Support Center. All 156 navigation markers in Qiongzhou Strait have now been replaced with China's independently-developed technology.

Fu Jun, vice head of navigation markers authority of Haikou city, told the media that the replacement and renewal project started in May 2019, with the aim of serving the construction of a free trade port in Hainan, and accelerating the development of a demonstration zone for the Qiongzhou Strait maritime fast passage.

Located between Hainan Island and Leizhou Peninsula in Guangdong, the Qiongzhou Strait is a key passage connecting Hainan Island with the mainland. It also connects the east and west sections of the South China Sea.

There are more than 150 cruise ships and fishing and goods transporting boats passing through the Qiongzhou Strait a day, making it a key channel for the development of Hainan Province.

The navigation markers are used by mariners to sail in the correct direction and mark limits and obstacles in the channel.

With the accelerated development of Hainan free trade port, international trading venues for energy, shipping, bulk commodities and property rights will be set up in Hainan in the future. The Large-scale and high-speed merchant ships have become the development trend.

Analysts believe that the full coverage of the BeiDou navigation markers will further improve the management efficiency and meet the requirements of navigation safety and efficiency in any future port.

Many Chinese internet users were excited about the move, which was regarded as a milestone in the defense of China's national security on the sea.

"It will be difficult for the US to monitor our navigation in the South China Sea. The independence of BeiDou provides China with confidence in such a critical area such as satellite navigation and positioning," wrote an internet user on Sina Weibo.