No cell phones, no digital cameras, and no smart wearable devices -- the Guizhou provincial government has revised a regulation to keep the noise down and prevent human activities from affecting the world's largest telescope. 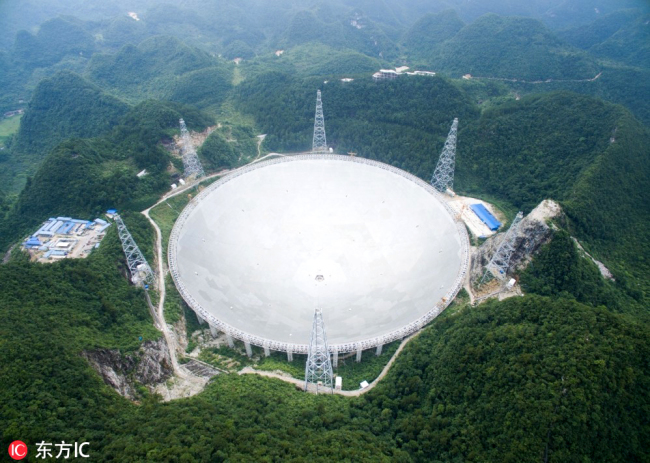 The blanket ban is enforced on radio equipment and electromagnetic gadgets, including tablets, speakers and drones, in the core silence zone of the Five-hundred-meter Aperture Spherical Telescope (FAST).

The total quiet area of FAST includes a 5-km radius as the core zone, 5 km to 10 km radius as the intermediate zone and a peripheral zone that covers 10 km to 30 km in radius.

Visitors and tourists who enter the quiet area shall abide by the regulation to minimize confusing operations of the telescope.

Since FAST began its trial operation in 2016, it has seen a tourist surge. A regulation in 2013 did not include details on how to prevent human activities from interfering with the operation of the giant dish.

The new regulation is more specific on the management of visitors, delineates responsibilities for regulators, orders warning signposts to be established and requires local authorities to engage the public in maintaining an interference-free environment. It raised the maximum fine for those who break the rules from 5,000 yuan (about 734 U.S. dollars) to 200,000 yuan.

The regulation is expected to be effective starting from April 1, 2019.

Radio telescopes work by tracking and reading faint energy waves from stars and gases, so they have to be located in sparsely populated areas to avoid electromagnetic interference. The giant dish, which is 500 meters in diameter, has found 44 pulsars.

The telescope will start formal operation and open to Chinese astronomers this year.