CHINA China, Russia appear to be in discord over whether to re-open land port amid pandemic

China, Russia appear to be in discord over whether to re-open land port amid pandemic 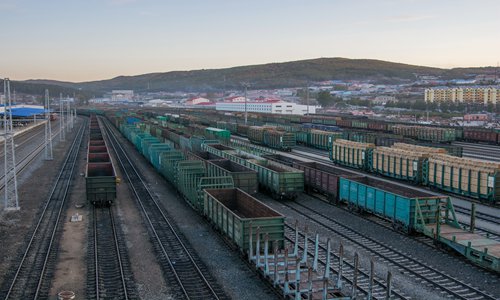 As epidemic wanes in China, North East China's Heilongjiang Province recently came under the spotlight as one of its border cities with Russia, Suifenhe, recorded 118 COVID-19 cases in just 5 days, all of whom were Chinese nationals returning home from Russia.

The growing number not only shocked China but also overwhelmed the medical capacity of the small border city, which has a population of mere 70,000.

Fearing that the pouring infections might collapse its medical system and spark widespread outbreak, China temporarily suspended the Suifenhe land port on April 7 to give itself more time to prepare for the inbound patients.

The only problem is that Russia, which is under increasing pressure to contain the virus as it just witnessed a record-high single day surge of confirmed cases, may not be able to accommodate Chinese nationals aggregating at the border for long.

Lu Yuguang, a journalist of Phoenix TV in Russia, said Wednesday on Twitter-like Weibo that Russia's Ussuriysk customs required the Chinese side to re-open its border port to receive citizens returning to China through the land port as the direct flight was limited to once a week.

Customs said they have opened the Pogranichny port and moved stranded Chinese travelers to the port, waiting for Suifenhe to open up, according to Lu's post.

Lu's post has not been verified by the embassy and consulates as of press time.

Russian media reported on Thursday that Ussuriysk border ports close to China's Suifenhe have resumed cargo operations on Thursday. It did not mention whether travelers are allowed to pass through the customs.

Russia on Thursday reported a record one-day rise of 1,459 new cases of coronavirus, pushing its national total to 10,131, Reuters reported.

Lu's post has sparked massive debates on the Chinese internet with some netizens expressing disappointment over Russia's arrangement, claiming it was irrational to let Chinese nationals to wait at the border for Suifenhe to open, as doing so might facilitate cross-infection.

Global Times also learned that the hotels available for isolation in Suifenhe, which locked down on Wednesday, are fully occupied, including hotels for hundreds of medical workers. A makeshift hospital with over 600 beds is expected to be completed on April 11, which might ease the burden.

"Our public health capacity is saturated, and we hope that the Russian side will understand and help take care of our compatriots for the time being," a Suifenhe resdient told the Global Times on Thursday.

Heilongjiang Province has sent 222 medics to aid Suifenhe as of Thursday.

Zhao Lijian, spokesperson of Chinese Foreign Ministry, said on a media briefing Thursday that the passage at the land border between China and Russia has been temporarily closed.

The Chinese government attaches great importance to the health and safety of Chinese citizens in Russia, maintaining close communication with the Russian side, and urges the Russian government to provide convenience and guarantee for Chinese citizens in terms of residence and medical treatment. The Chinese diplomatic and consular missions in Russia have been in close contact with Chinese citizens to help them cope with the pandemic. At present, there are regular commercial flights between China and Russia, Zhao said.

Wu Dahui, a professor of international relations at Tsinghua University, told the Global Times that it is not the case that China doesn't want to accept its citizens stranded on the border. China is moving to make preparations to receive them, such as hospitals and medical teams.

Wu said the rumors over the Ussuriysk customs' move to some extent shows the severe condition in Russia's far east region in terms of pandemic prevention and control, as they do not have the ability to temporarily take in stranded Chinese. Local Russian regulators also face pressure from the central government, which might lead to the stranding of Chinese at the border.

Yang Jin, an associate research fellow at the Institute of Russian, Eastern European and Central Asian Studies of the Chinese Academy of Social Sciences, told the Global Times on Thursday that "it is normal for Russia to express its concern as the confirmed cases in the country is rising, but we also hope Russia could understand China's pressure."

It is understandable that countries prioritize their own interests amid the pandemic, Wu said, noting the dispute will not affect the strategic cooperation and friendly relations between China and Russia. Since the COVID-19 outbreak, the two countries have been exchanging supplies and closely coordinating with each other. Communication at the strategic level is smooth, and problems at the local level can also be solved.

Hua Chunying, the spokesperson of the Chinese Foreign Ministry, expressed gratitude to Russia on April 3, saying Russia was among the first batch to aid China with 23 tons of medical supplies through chartered planes. China also gave a hand-25.5 tons in medical supplies- when Russia was in trouble.

Wu also believes the friction will further improve the China-Russia border public health cooperation mechanism, which did not include disease control before.