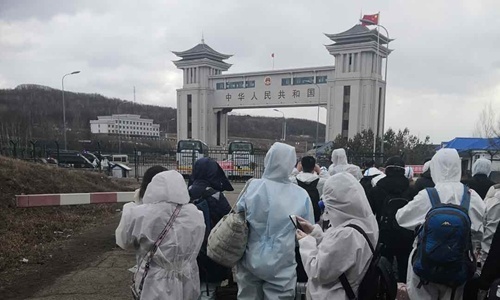 The city on the border of China and Russia, Suifenhe, located in Northeast China's Heilongjiang Province has been accepting donations from the public as an increasing number of imported coronavirus cases mount huge pressure on the small city.

The city is now accepting donations of protective clothing, masks, medical alcohol, temperature detectors, disinfectants and other medial materials, according to a document released on Saturday.

From March 27 until Thursday, a total of 151 imported confirmed cases and 148 asymptomatic infections were reported in Suifenhe. In addition, 2,497 people have entered China from the Suifenhe border crossing as of Friday since March 21, according to data released by the Health Commission of Heilongjiang Province.

Suifenhe, a prefecture-level city, has an area of 460 square kilometers and a population of less than 70,000, seeing a lack of medical staff.

Heilongjiang Province has dispatched medical teams of 222 staff since March 31 to Suifenhe and its jurisdiction city Mudanjiang, with a preparation team of 1,000 medical support personnel stationed in other prefecture-level and provincial-level medical institutions.

A cabin hospital in Suifenhe, providing more than 600 patient beds, is to be put into operation on Saturday, with around 400 medical staff expected to work in the hospital, the city's publicity department said.

A resident surnamed Liu from the Xinxing community told the Global Times on Saturday that all estates in Suifenhe have been locked down and only one person from a household will be allowed to go out to buy necessities every three days.

Liu is a primary school teacher. All teachers and students have been teaching and learning at home since the outbreak of the novel coronavirus pneumonia began.

Several residents said prices of daily necessities have remained stable during the past few weeks, after the city accepted imported cases of COVID-19.

The local government has provided protective clothing, masks, and other preventative supplies to all frontline workers, a medic surnamed Wang, who works at a frontline hospital in Suifenhe, told the Global Times on Saturday.

According to the latest policy, ports in Heilongjiang Province have implemented isolation measures and closed-loop controls, including complete quarantine for inbound transportation, temperature monitoring for entry personnel, implementation of nucleic acid sample testing and complete isolation.

All front-line staff who have had contact with imported cases will be picked up from home and taken to work via specially designated vehicles to curb contact with other people.