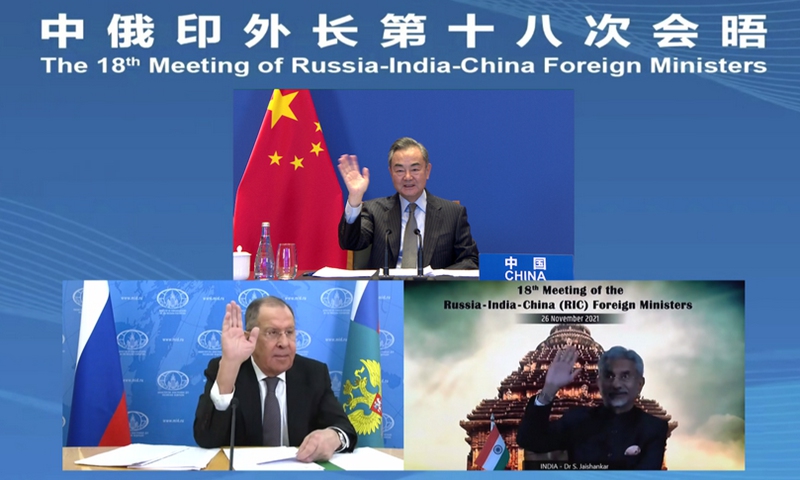 China, Russia and India released a joint communique on Saturday following the 18th meeting of the foreign ministers of the three countries on November 26 that took place in the format of digital video conference. The ministers reached consensus on a broad range of international issues, including expressing support for the upcoming Beijing Winter Olympic Games.

The meeting took place against the backdrop of headwinds caused by the COVID-19 pandemic, a bumpy economic recovery as well as continuing threats of terrorism, extremism, drug trafficking, trans-national organized crime, natural and man-made disasters, food security and climate change, the communique noted.

According to the communique, the ministers exchanged views on further strengthening the Russia-India-China trilateral cooperation and also discussed various regional and international issues of importance. The ministers stressed the necessity of regular high-level meetings to foster closer cooperation among them.

The ministers underlined that SCO as an influential and responsible member of the modern system of international relations that plays a constructive role in securing peace and sustainable development, and consolidating ties of good-neighborliness and mutual trust.

The ministers underlined the importance of a timely, transparent, effective and non-discriminatory international response to global health challenges including pandemics, with equitable and affordable access to medicines, vaccines and critical supplies.

They called for strengthening the policy response capability of the World Health Organization in the fight against Covid-19 and other global health challenges, while urging for making COVID-19 vaccination a global public good.

The ministers reiterated that a multi-polar and rebalanced world based on sovereign equality of nations and respect for international law and reflecting contemporary realities requires strengthening and reforming of the multilateral system. They also reaffirmed commitment to upholding international law, including the purposes and principles enshrined in the Charter of the United Nations.

The three ministers reaffirmed their support for a transparent, open, inclusive and non-discriminatory multilateral trading system, with the World Trade Organization (WTO) at its core. They reiterated their support for the necessary reform which would preserve the centrality, core values and fundamental principles of the WTO while taking into account the interests of all members, especially developing countries and the group of Least Developing Countries.

The ministers agreed that the imposition of unilateral sanctions beyond those adopted by the UN Security Council (UNSC) as well as "long-arm jurisdiction" were inconsistent with the principles of international law, have reduced the effectiveness and legitimacy of the UNSC sanctioning regime, which had a negative impact on international economic and trade relations. They called for a further consolidation and strengthening of the operating mechanism for the UNSC Sanctions Committee to ensure its effectiveness, responsiveness and transparency.

They reiterated the importance of full implementation of the Joint Comprehensive Plan of Action (JCPOA) and UNSC Resolution 2231 and expressed their support for efforts to ensure the earliest reinvigoration of the JCPOA which represents a landmark achievement for multilateral diplomacy and nuclear non-proliferation.

The meeting also underlined the importance each country attaches to multiple regional cooperative mechanisms, like the intra-BRICS cooperation, the Shanghai Cooperation Organization, G-20, and the Association of Southeast Asian Nations (ASEAN).

The ministers also reaffirmed their commitment to climate action through the implementation of the Kyoto Protocol and Paris Agreement. They also expressed their support towards China to host of the Beijing 2022 Winter Olympic and Paralympic Games. 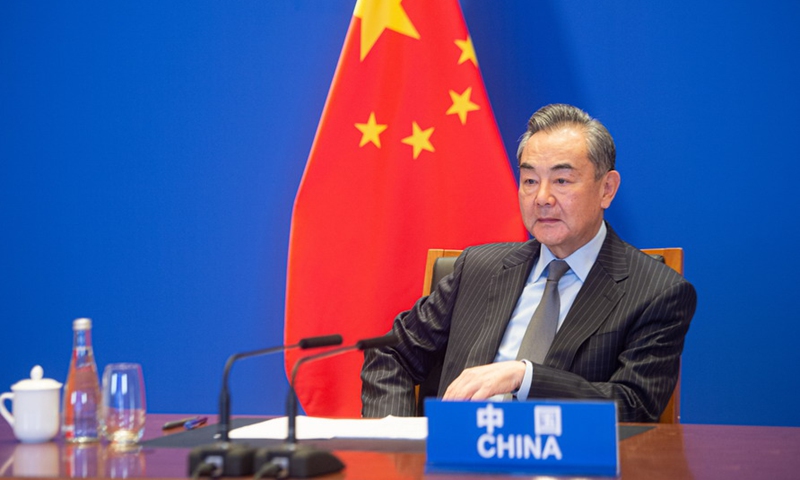 China, Russia and India have chosen development paths suited to their own national conditions and they have the responsibility to foster a correct view of democracy, escape from the "democracy trap" set by certain countries and oppose interference in other countries' internal affairs under the pretext of democracy, Wang said, adding that the US government-organized "democracy summit" will create division and bring negative energy to the world.