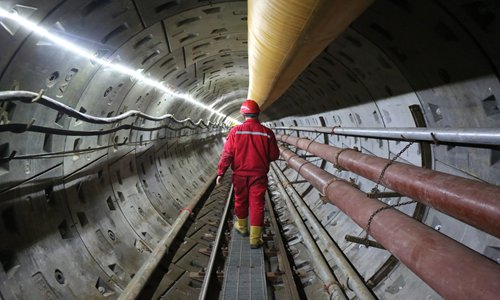 The Chinese part of the China-Russia east route pipeline project stretches 5,111 kilometers throughout eight provinces and one municipality from Heilongjiang province in the north to Shanghai in the east.

Together with the Russian part of the project, or the 3,000-kilometer Power of Siberia pipeline, the pipeline is expected to pump 38 billion cubic meters of natural gas from Russia to China annually when it reaches full capacity, under a 30-year agreement between Russian company Gazprom and China's CNPC.

That amounts to about 13.6 percent of China's gas consumption in 2018, or 280.3 billion cubic meters, according to data from the National Development and Reform Commission.

"It will not only increase gas supplies to targeted areas, but also has great significance in improving pipeline infrastructure construction and interconnection, as well as enticing market competition to reduce gas costs."

Gas deliveries from the new pipeline can help hedge uncertainties about existing gas pipelines, and are also free from the obstacles that liquid natural gas transports often face during bad weather, he said, adding China imported 125.5 billion cubic meters of natural gas in 2018, with a foreign reliance of 45 percent, among which 42 percent were from pipeline transmission.

Lin Boqiang, head of the China Institute for Studies in Energy Policy at Xiamen University, said the large quantity of natural gas flowing through the pipeline project will ensure gas supplies at low costs in related areas, such as the Beijing-Tianjin-Hebei region, and the Yangtze River Delta area.

China still has massive room for natural gas consumption to grow, as the clean energy makes up about 8 percent of the country's primary energy consumption, while in many developed countries the figure is above 20 percent, he said.

The project will first benefit Northeast China, which currently relies on natural gas supplies primarily from Daqing Oilfield, Jilin Oilfields, Dalian LNG Terminal, and Qinhuangdao-Shenyang pipeline, and lags far behind national level regarding use of natural gas, according to Xiong.

Natural gas made up only 4.7 percent of primary energy consumption in Northeast China in 2018, in contrast with the national level of 8 percent, he said, adding it is positive for the region to increase natural gas utilization as the China-Russia pipeline will provide relatively low-cost natural gas to the area.

Both experts said Russia and China have great potential in energy cooperation, because Russia has abundant natural gas resources while China has a huge market, and also because as neighboring countries, they don't need to consider a third-party's influence to cooperate and build related infrastructure.

There will be significant increase in Russia's natural gas output and exports by 2035, with increased exports mainly pivoting to the Asia market, according to the country's draft energy strategy up to 2035, Xiong said.

Xiong said market mechanisms should play a larger role to make the most of natural gas transmission and sale networks.