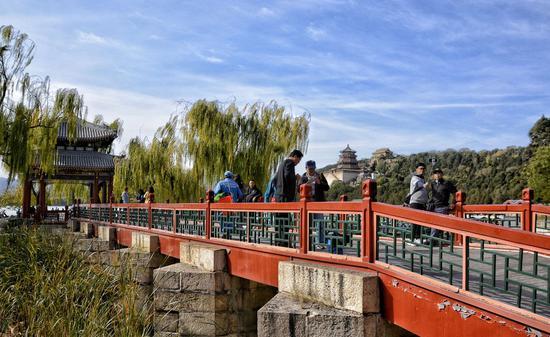 China has vowed to reach CO2 emissions peak before 2030 and achieve carbon neutrality ahead of 2060. To realize these goals, outlining measures to achieve the targets will be a significant step in the country's 14th Five-Year Plan.

Carbon intensity target is expected to be set for the 14th Five-Year Plan period (2021-2025) in accordance with the carbon emission targets, and specific plans will be drawn up to tackle climate change, according to the Ministry of Ecology and Environment.

As China has tied its carbon promise to a specific year for combating climate change, some Western critics have questioned its ability to realize the goals while trying to achieve economic growth.

China is a country that keeps its words. Once the five-year plan is finalized, the country -- from the central government to local governments -- will ensure its implementation. For instance, eight of the nine objectives related to ecological environment defined in the 13th Five-Year Plan have been realized ahead of schedule. The remaining objective which is meant to ensure that 337 cities experience good air quality for more than 84.5 percent of the days by 2020 is expected to be realized as planned.

The COVID-19 pandemic and a global recession have posed formidable challenges to growth prospects, but China will not let uncertainty derail the country's efforts to push green development and tackle climate change. While seeking quality development, the country will not cross the red line of ecological protection or ease regulations because of concerns over economic and social fallout.

The government has not underestimated the challenges of achieving ecological progress in the long term. To achieve carbon neutrality by 2060, social, economic, energy and technological systems need to adapt and transform. It is important to see the push to go green as a source of growth rather than a drag on the economy. Policymakers will seize the historic opportunities presented by the new round of scientific and technological revolution to promote the transformation and upgrade of economic, energy and industrial structures.

For instance, the Chinese government approved a plan in early October to boost the new energy vehicle industry. China will accelerate the development of national carbon markets, continue low-carbon pilot programs, and launch pilot projects for investment and financing. Its revised environment protection law, considered "the strictest" in history, has ratcheted up the crackdown on environmental violations.

As the world's largest developing country, China has taken an active part in global environmental governance and is willing to undertake obligations matching its development level. If China were to achieve carbon neutrality before 2060, it would help lower global warming projections by around 0.2 to 0.3 degrees Celsius, said a new study by Climate Action Tracker, a Berlin-based non-profit climate science and policy institute.

China prioritizes ecological progress in every dimension and phase of economic and social development, bringing huge opportunities to foreign companies, including but not limited to the country's large clean energy projects in which foreign enterprises can invest, and air pollution prevention and control technology and commercial applications.

Humankind can no longer afford to ignore the repeated warnings of nature and go down the beaten path of extracting resources without investing in conservation and pursuing development at the expense of protection. Like the fight against the pandemic, it takes international collaborative efforts to limit global warming. China has made the move to strengthen such efforts toward a greener world in the post-COVID era.