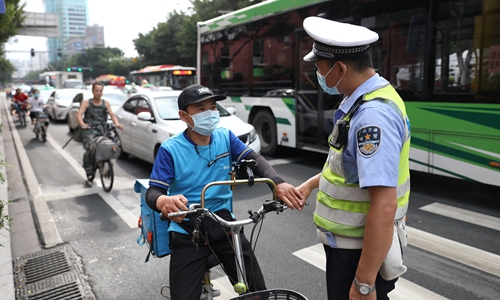 A police talks to a scooter rider who did not wear a helmet on Thursday in Guangzhou, South China's Guangdong Province. (Photo: VCG)

As China's new traffic policy that makes wearing helmets compulsory for electric scooter riders comes into effect on June 1, the price of helmets is expected to rise alongside a helmet supply shortage in the short term, media reported.

Helmets which were sold for 30 yuan ($4.22) before April are now sold at prices higher than 80 yuan, financial news outlet 36kr.com reported on Monday.

The helmet price increase began after the Chinese Ministry of Public Security on April 21 launched the campaign "one helmet, one belt," which will take effect on June 1, aiming to protect people on the roads by mandating scooter riders to wear helmets and car drivers to fasten their seatbelt.

China already had a policy requiring motorcyclists to wear helmets, but this is the first time Chinese authorities have forced electric scooter riders to follow suit.

Given China's high level of electric scooter ownership, the move has led to a huge increase in demand for helmets and an acute supply shortage.

According to official data, as of June 2019, there were nearly 250 million electric scooters in China. Taking unregistered scooters into account, that number could be as high as 300 million.

However, as it was not compulsory, only 30 percent of electric scooter riders were wearing helmets. That means China could be short of up to 200 million helmets, and the market size could surpass 10 billion yuan, reported 36kr.com.

The new policy not only drove up consumer demand, but saw scalpers attempt to buy up the available stock to drive up prices and reap a profit. Many scalpers who made quick money by stockpiling face masks early in the COVID-19 epidemic in China had spoken to helmet makers as rumors trickled in prior to the policy release.