As a rising power in the global aerospace sphere, China is rapidly increasing its presence in the international market and making use of all suitable occasions to promote its planes, drones and carrier rockets. 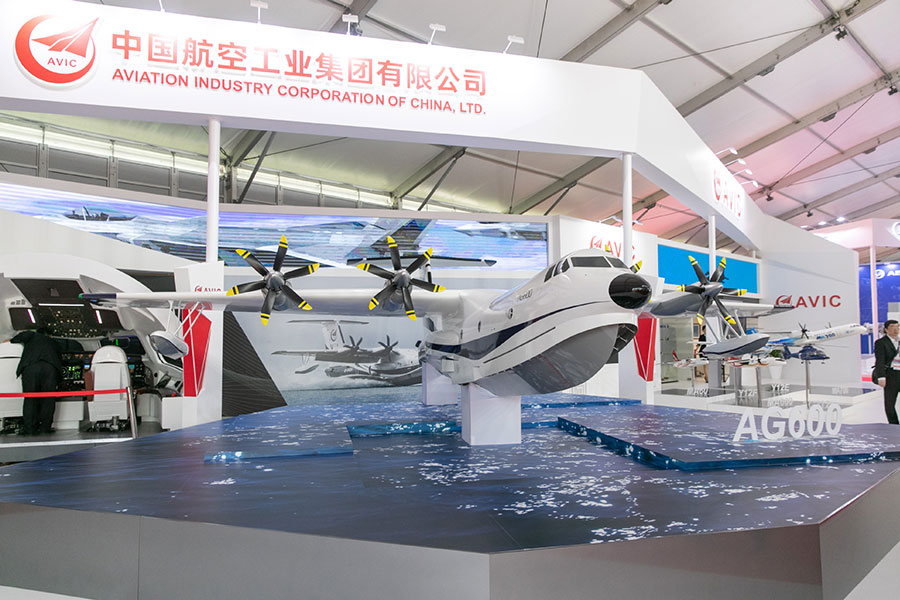 A large-scale model of the domestically developed Aviation Industry Corp of China AG600 Kunlong seaplane, the world's newest and largest amphibious aircraft, is displayed at the China Pavilion during the International Aviation and Space Salon 2019 on Aug 27, 2019. (Photo: China Daily)

At the International Aviation and Space Salon 2019 held from Aug 27 to Sept 1 in Zhukovsky, a small town near Moscow, China displayed a host of its latest products.

With a length of 37 meters and a wingspan of 38.8 meters, the AG600 is roughly the size of a Boeing 737.Powered by four domestically designed WJ-6 turboprop engines, it has a maximum takeoff weight of 53.5 metric tons. It is the world's biggest amphibious aircraft, surpassing Japan's ShinMaywa US-2 and Russia's Beriev Be-200.

The seaplane will mainly be tasked with aerial firefighting, and maritime search and rescue operations. It can also be refitted to conduct marine environmental inspections, marine resource surveys as well as personnel and supply transport, according to AVIC.

It is designed for ground-and water-based takeoffs and landings and has an operational range of about 4,500 kilometers. It can carry more than 50 people.

When assigned to fight forest fires, it can collect 12 tons of water from a lake or sea in 20 seconds and use it to douse blazes over an area of about 4,000 square meters, the company said.

"If the seaplane is put into service, it will be able to extensively reduce economic losses caused by natural disasters," Li Yang, an AVIC marketing manager for the AG600, said at the MAKS 2019.

Li said mass production of the AG600 is expected to start in 2023 after the aircraft's scheduled receipt of all necessary certificates from the Civil Aviation Administration of China.

Two AG600 prototypes are currently undergoing tests. Designers and engineers are preparing for the first prototype to carry out sea-based flight tests, he said.

They are capable of reconnaissance and surveillance, electronic jamming, targeted strikes and border patrols. Besides military operations, they can perform civilian tasks such as disaster monitoring, environmental inspections, resource surveys and meteorological research, according to Wang Yaoxin, vice-president of China National Aero-Technology Import and Export Corp, an AVIC subsidiary and the biggest exporter of aviation defense products in China.

China is in talks with several countries on cooperation projects concerning these drones, he said.

According to AVIC, at least 100 Wing Loong I units have been delivered to foreign users, and Wing Loong II has received at least one foreign contract.

Wang Yanan, editor-in-chief of Aerospace Knowledge magazine, said the AG600 may be of interest to countries with extensive coastlines or many islands because the seaplane is suitable for maritime operations as it is much faster and more flexible than ships.

Speaking of the Wing Loong drones, he said they must be attractive to many foreign militaries that have no combat drones and seek affordable ones.

"The Chinese drones sell well in the international market and perform well in battle, which wins them a good reputation. Moreover, they can be refitted to adopt foreign weapons, offering more options to users," the editor said.

China Aerospace Science and Industry Corp, a major defense and space contractor in China, featured its Kuaizhou 11, said by its designers to be China's largest and most powerful solid propellant carrier rocket, at the MAKS 2019.

It is scheduled to make its debut flight at the Jiuquan Satellite Launch Center in northwestern China before the end of this year.

It will be mainly tasked with ferrying small satellites to low-Earth or sun-synchronous orbits with altitudes ranging from 400 kilometers to 1,500 km.

Kuaizhou 11 has a length of 25 meters, a diameter of 2.2 m, and a liftoff weight of 78 metric tons. It can place a 1-ton payload into a sun-synchronous orbit at an altitude of 700 km, or a 1.5-ton payload into a low-Earth orbit, the company said.

Chinese private firms also used the air show as a window for their technologies and products.

LandSpace, a Beijing-based space startup and one of the leading private rocket makers in China, brought scale models of its carrier rockets to the MAKS 2019 and announced during the event that it has begun inviting payload partners from around the globe to consider using its ZQ 2 liquid-propellant, medium-lift rocket.

Zhang Long, president of Land-Space, said that ZQ 2's debut mission in 2021 will ferry several small satellites to a sun-synchronous orbit at an altitude of about 500 kilometers, adding that some domestic and foreign firms have reached out to his company and expressed interest.

The ZQ 2 will be capable of placing 2-ton payloads into a sun-synchronous orbit of 500 km or 4-ton satellites into a low-Earth orbit at altitude of 200 km.

China was the country partner at the event this year.