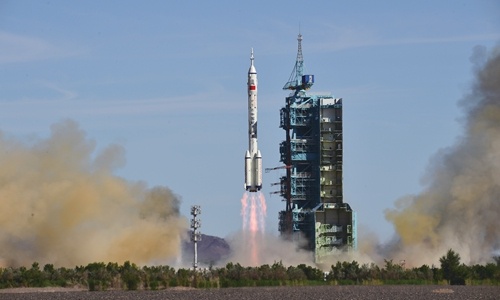 The rapid development of the aerospace sector in China has led to a boom in space insurance, with two insurance heavyweights alone covering nearly 300 satellites and rockets and the number continues to rise.

China's aerospace sector recorded series of milestones over recent months. Just after Zhurong Mars rover reached the surface of Mars in May, three Shenzhou-12 taikonauts entered the country's own Tianhe space station several days ago. Besides, China has seen a surge in commercial space development over recent years, with the country's space insurance sector growing in lockstep.

PICC Property and Casualty Co has provided insurance for nearly 150 satellites in recent years, including the four Earth observation satellite series Fengyun, Haiyang, Ziyuan and Gaofen as well as satellites exported to other countries.

In addition, the insurer has signed a cooperation agreement with the China National Space Administration's Lunar Exploration and Aerospace Engineering Center. It was named as the exclusive insurance provider for China's first Mars exploration mission, as the country just successfully landed the "Zhurong" rover on Mars in May, according to media reports.

As of 2020, Ping An Property and Casualty Insurance Co has provided pre-launch and launch insurances as well as coverage for satellites in orbit for more than 120 satellites and rockets. The company unprecedently defined partial loss of remote sensing satellites and loss of observation satellites to meet diversified needs of commercial aerospace.

Huang Zhicheng, an expert in the space industry, told the Global Times on Wednesday that insurers are active in providing insurances for satellites and rockets, as the amount of insurance payouts is generally within their affordability.

He said that most of the insurers within the aerospace market are state-owned enterprises considering the large scale of risk coverage, whereas the projects are generally commercial launches.

"The probability of failure of space insurance is lower than 3 percent," he said, noting that an insurer may cooperate with other partners or make reinsurance arrangement to diversify risks.

Unlike car insurance, cover for launch of satellites or rockets is not compulsory. However, given the high value, risk, and complexity of aerospace projects, companies are increasingly inclined to take out insurance, experts said.

However, different from other insurance policies, space insurance is typically customized to suit each satellite or rocket, especially given that aerospace technology evolves fast.

Within insurance companies, there are satellite and rocket experts who may be previously involved in rocket design, Huang said, noting that with the support of aerial photos taken by remote sensing satellites, they are able to accurately evaluate the ground facilities their insurance covers.

An industry insider who preferred to be unnamed told the Global Times on Wednesday that commercial satellite companies generally authorize insurance brokerage companies to evaluate risks about the subject matter by using their knowledge and expertise in both insurance and aerospace, and then form insurance plans based on market conditions and the characteristics of the subject matter.

Insurers then make bids ensuring that satellites or rockets can obtain sufficient coverage at a reasonable price, he said, noting that serious accidents may cause huge insurance loss and even lead to large-scale market shuffle.

For example, a European Vega rocket carrying a military satellite for the United Arab Emirates (UAE) veered off course shortly after blast off and crashed in July 2019, the first time in 15 launches, as reported by Reuters. The crash hit insurers with the largest recorded space market loss of 369 million euros ($411.21 million), according to reports.

"In recent years, domestic insurers covering satellites rely too much on international reinsurance market, and domestic reinsurance firms should step up support for aerospace insurances so as to contribute to the country's space career," he said.

China has incrementally improved aerospace insurance policies to support the key sector's development. In a bid to support commercial enterprises to carry out the R&D, manufacturing and launch operations, the Beijing government in November 2020 announced that city will offer subsidies worth up to 50 percent for space related insurance, with the maximum subsidy worth 5 million yuan ($771,000) for a single product.