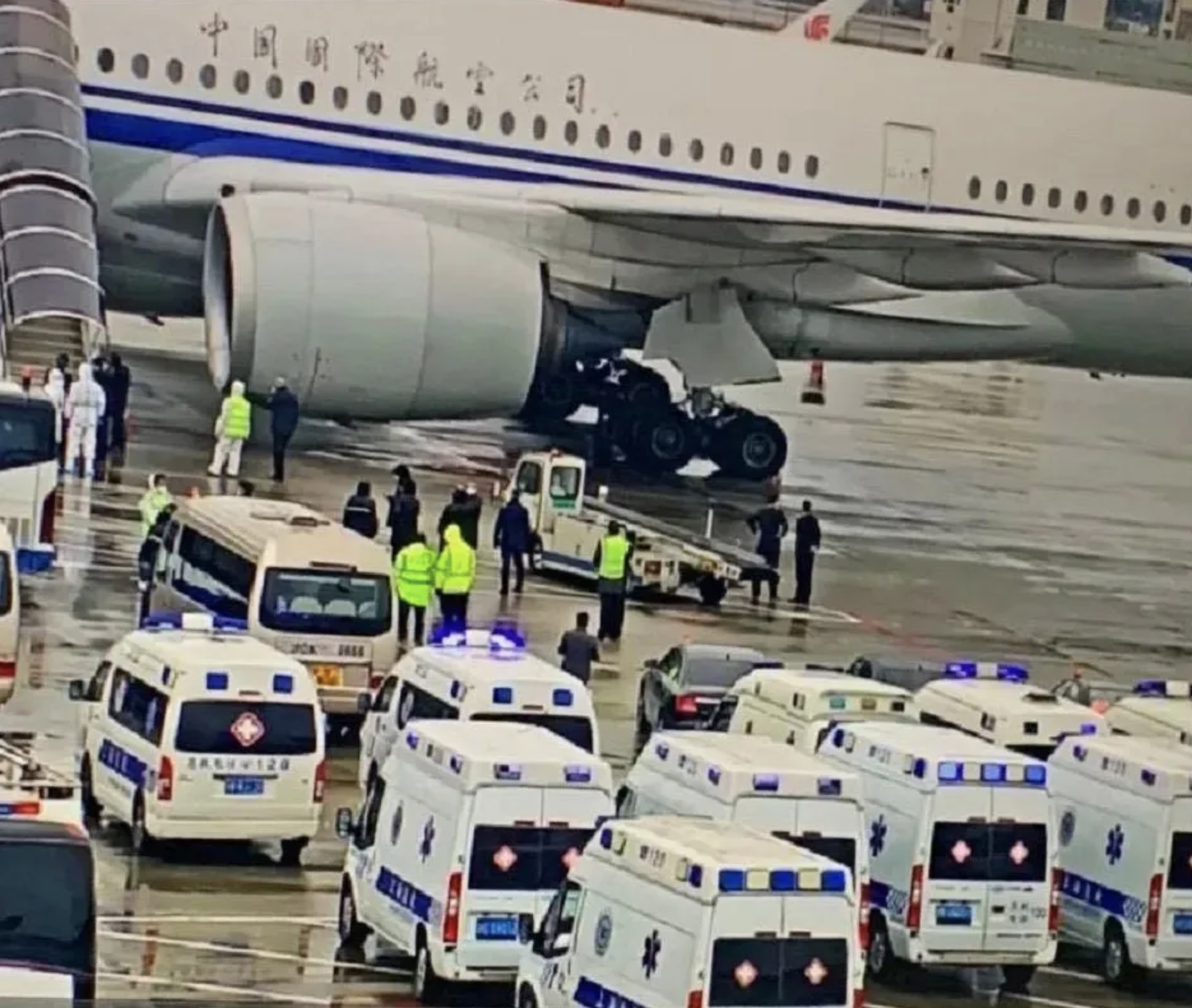 This photo of epidemic control and prevention workers waiting next to an inbound flight went viral on Chinese social media.

In the picture, many ambulances and a group of customs quarantine staff, police and airport staff in protective suits were on standby next to an Air China airplane at Pudong International Airport in Shanghai, China, on March 13.

Passengers with a fever found on flight CA 936

Flight CA936 from Frankfurt, Germany to Shanghai landed at Shanghai Pudong International Airport at 12:37 p.m. on March 13. The flight had 286 passengers, including six infants and 17 crew members. What made this flight stand out was that four of its passengers had a fever, and two others had been taking cold medicine.

As soon as they were notified, the Shanghai COVID-19 Prevention and Control Headquarters responded immediately. The body quickly reached out to other related departments, including the port, disease control center and medical groups, and executed its prevention and control plan. 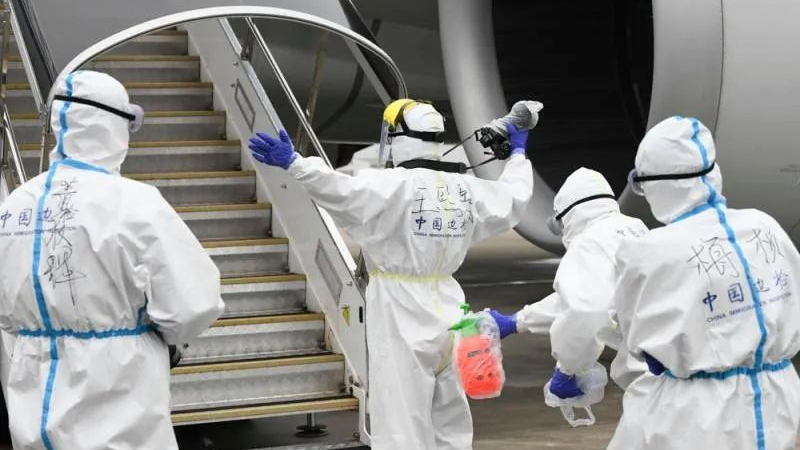 After onboard checks by customs officers, the six passengers, all Chinese, and their four companions completed their entry procedures on the airport apron and were taken to designated medical institutions in ambulances. Another 30 passengers who had close contact with fevered passengers on the flight were delivered to quarantine sites for medical observation.

A second circular further clarifying the preventive and control measures for all passengers and crew on flight CA936 was published later that evening. The remaining 246 passengers disembarked in batches of 40 and took the airport bus to the terminal to complete the relevant epidemiological investigations and customs clearance procedures in accordance with the prevention and control requirements for entry quarantine. 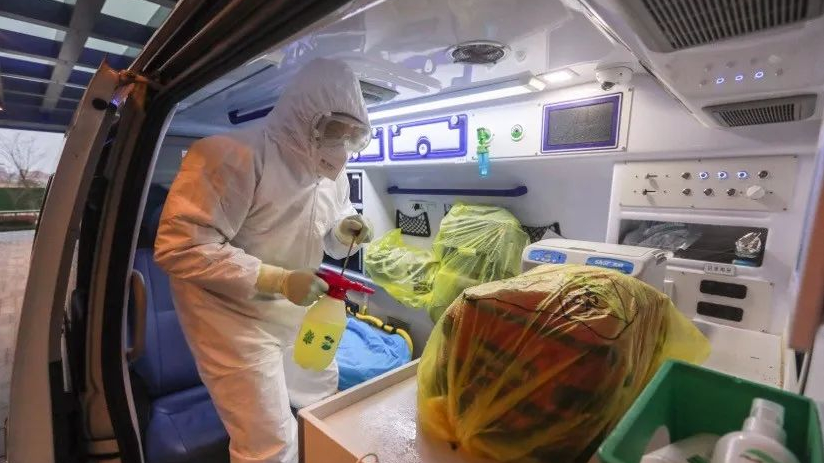 A member of the prevention and control team sprays disinfectant on a passenger's luggage at Shanghai Pudong International Airport. (Photo: CGTN)

With COVID-19 now reaching pandemic levels, many airports in China have implemented strict customs clearance procedures and epidemiological investigations to prevent the reintroduction of the virus via someone returning to China from overseas.

On Thursday, the Shanghai COVID-19 Prevention and Control Headquarters announced that starting March 13, all Chinese and foreigners who had lived or been to South Korea, Italy, Iran, Japan, France, Spain, Germany, America, etc. within the last two weeks should undergo a 14-day homebound or concentrated isolation.

The headquarters asked everyone entering or exiting the country to declare their health status honestly. Those who conceal or make false statements on the health declaration form and cause the spread of the virus will face legal consequences. 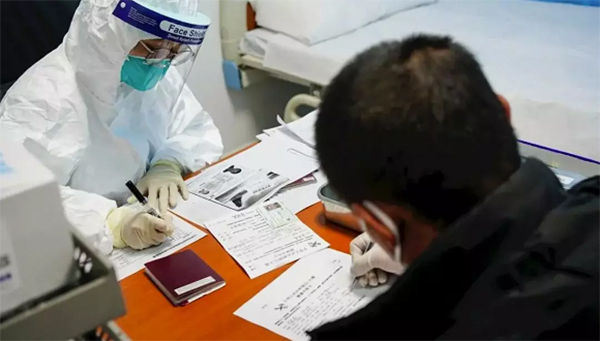 After witnessing the rigorous inspection and control measures, especially the detailed deployment of flight CA936 at Shanghai Pudong International Airport, many Chinese netizens have expressed their trust and relief. 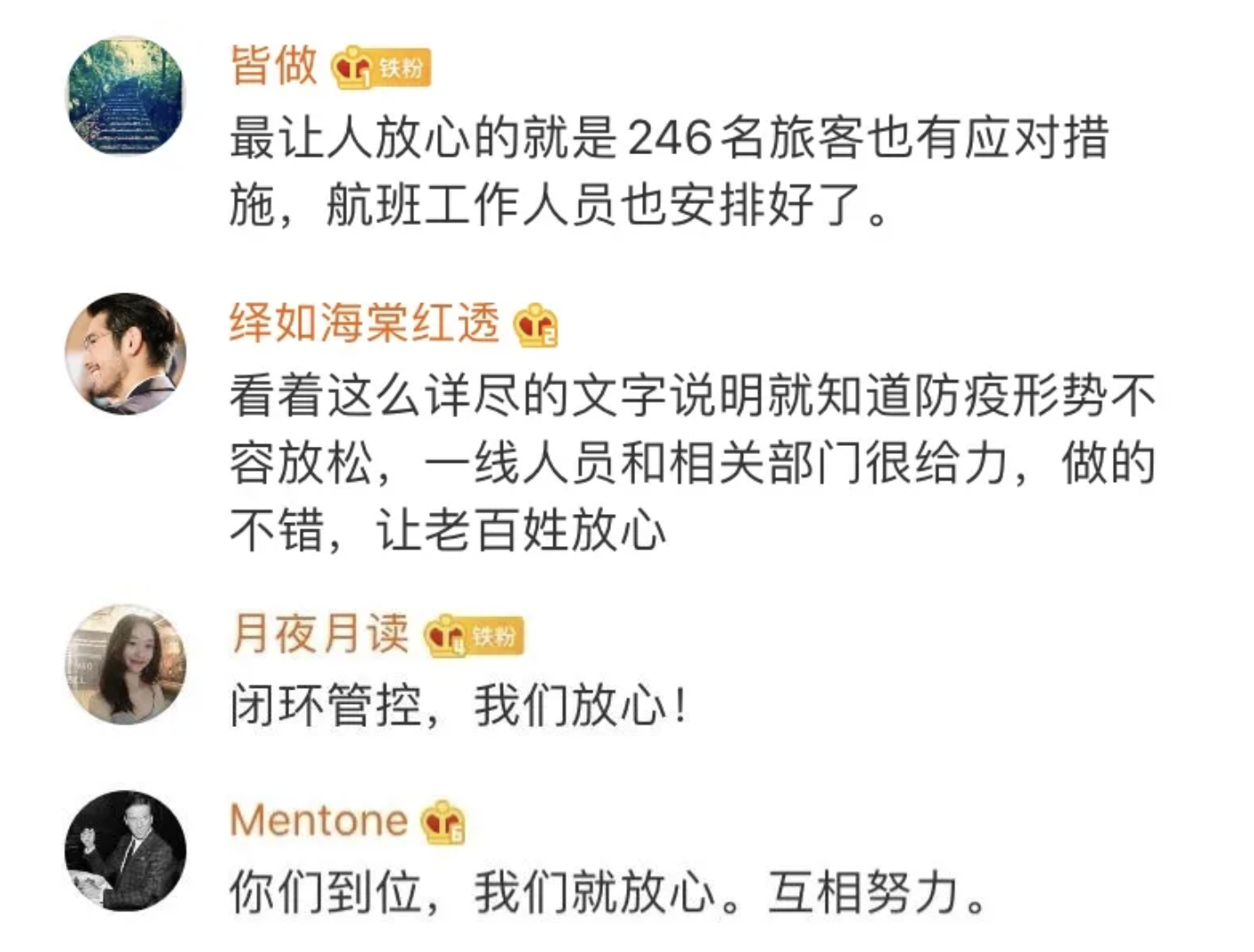 @Jiezuo: The most reassuring thing is that the remaining 246 passengers also have measures in place.

@Yiruhaitanghongtou: Seeing such detailed notice, we learned that the epidemic prevention situation cannot be eased. The frontline staff and related departments are very efficient so that the people can rest assured.

@Mentone: When you guys are in place, we can rest assured. Let's fight together.