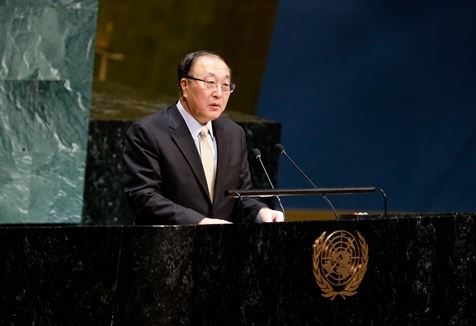 New York (People’s Daily) - Ambassador Zhang Jun of China delivered a speech to the UN security council on Thursday in which he addressed the importance of upholding the UN charter.

Over the past 75 years, the “four purposes” and “seven principles” enshrined in the UN charter make up the basic credo by which states interact with one another. The principles of inter alia, sovereign equality, peaceful settlement of disputes, no threat or use of force, respect for political independence and territorial integrity of states and non-interference in internal affairs have taken root in people’s hearts and minds and have contributed significantly to world peace and common development.

Zhang stated that if we look around the world today, universal peace remains elusive. Unilateralism is on the rise dealing heavy blows to international rule of law and the international order, and as a result of spreading protectionism, the world economy is plagued with uncertainties. This is compounded by acts of bullying, whose effects are being felt around the world and are jeopardizing global peace and stability.

The recent sudden tensing up of the situation in the Middle East has significantly increased the risk of war. Much remains to be done to achieve peace and security, as today’s world makes it more imperative than ever before to uphold the UN charter.

It is imperative to strive for win-win results on equal footing and refrain from the “all-for-me” approach, so that all countries enjoy equal rights and benefit from equal opportunities on a level playing field.

Zhang said at present, the United States’ unilateral military adventurism has led to the tensing up of the situation in the Middle East. China supports UN Secretary General Guterres’ call for peace. We have been actively engaged in diplomatic operations and are committed to playing a responsible and constructive role in safeguarding international law, equity and justice, and regional peace and stability.

We call on all parties concerned to exercise maximum restraint, return to dialogue and consultation without delay, jointly work toward a de-escalation of the situation and jointly maintain JCPOA. If the situation in the region spins out of control, it will not serve anyone’s interests. Restoring peace is of crucial importance to the entire world. The Security Council should assume its duty emanating from the charter for the maintenance of international peace and security.

Zhang emphasized that China was the first country to sign the UN charter. It has consistently and scrupulously adhered to the purposes and principles of the charter and has unfailingly supported efforts to defend the authority and functions of the United Nations. In 2015, on the podium of the United Nations, Chinese President Xi Jinping systematically expounded on the important vision of building a community of shared future for humankind, which is a continuation and sublimation of the purposes of the UN charter.

In the face of the new era and new situation, China's commitment to the charter is unwavering and China honors every promise of support for the United Nations.

Zhang said while the world we live in is full of hope; it is also rife with challenges. We must not give up our dreams just because the reality is complex; we must not abandon our pursuit just because our ideals are not within easy reach. Let’s work hand in hand and tirelessly to realize the purposes and principles of the UN charter and build a community of shared future for humankind.