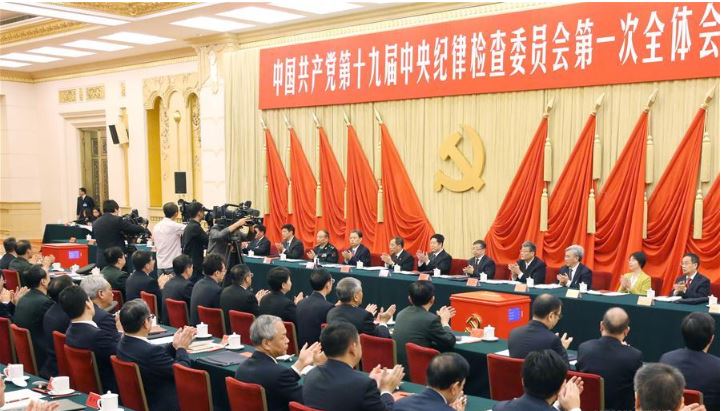 The list of "tigers" (senior officials taken down on corruption charges) grew by 51 last year, fulfilling the vow by Chinese graft fighters that "the battle will not end."

"We will continue to see that there are no no-go zones, no stone is left unturned and no tolerance is shown for corruption," said a communique adopted at the second plenary session of the 19th Communist Party of China (CPC) Central Commission for Discipline Inspection (CCDI) last January.

The 51 officials at or above the provincial/ministerial level were among a total of 621,000 people punished by CCDI and the National Supervisory Commission (NSC) in 2018.

Another plenary session of the CCDI will be held from Friday to Sunday, and is expected to set the agenda for this year's anti-graft campaign.

"Although China's campaign against corruption has made sweeping victory, now is not the time to lie back," said Xin Ming, a professor at the Party School of the CPC Central Committee. "We need to deal with not only some officials who have yet been investigated and punished for past misconduct, but also a few officials who dared to try in recent years even facing such a fierce campaign."

A TV documentary, broadcast by the China Central Television Wednesday, revealed a case showing the challenges in rooting out corruption at the local level.

The documentary featured villas illegally built in northwest China's Qinling Mountains, which undermined local environment. Despite repeated instructions from the central authorities, the governments in Shaanxi Province had acted slowly to curb the unlawful construction in the past four years.

Due to persistent follow-up from the central level and disciplinary inspection agencies, the 1,000 villas have been demolished and a number of local officials investigated since July last year, under the supervision of a special team from the CPC Central Committee headed by a deputy chief of CCDI.

A year ago the CCDI communique said the fight against corruption remained "grave and complex."

"The tough stance against corruption should not and will not ease," Xin said.

Last year's communique listed several priorities in the fight, including officials who show no restraint and continue their wrongdoing, corruption in selection and appointment of officials, government approval and supervision, resource exploitation, finance, and other key areas.

A series of heavyweight officials were investigated, ranging from senior officials of the central government, such as former deputy director of the National Energy Administration Wang Xiaolin and former vice minister of Public Security Meng Hongwei, to executives of state-owned enterprises such as Lai Xiaomin, former board chairman of China Huarong Asset Management Co. Ltd.

Corruption on the people's doorsteps, especially in poverty relief, as well as corruption linked to criminal gangs, was also closely addressed.

About 180,100 people were disciplined for corruption and violations of the code of conduct in poverty alleviation projects since late 2017. And in the first 11 months of 2018, 8,288 officials received disciplinary and administrative punishment and 1,649 were prosecuted for harboring criminal gangs.

Operations to improve conduct of officials made major progress. About 55,800 officials were punished for violating rules against undesirable conduct, such as bureaucratism and extravagance, in the first 11 months of 2018.

"One outstanding feature of the anti-graft campaign last year was more resources were used and efforts made to prevent corruption," Xin said.

Increasing attention was paid to minor offenses of officials. About 1.1 million officials were interviewed and cautioned for slight violations, about 63.6 percent of the total cases disciplinary inspectors handled in 2018.

It was important to detect minor misconduct as early as possible to prevent it from developing to serious corruption, Xin said.

Last year witnessed notable institutional improvements in supervision. With the Supervision Law taking effect in March, a more sophisticated and efficient anti-graft network was formed to oversee everyone working in the public sector who exercises public power.

The country pools supervisory powers that used to be divided and form a centralized, unified and efficient state supervisory system, said Ma Huaide, vice president of the China University of Political Science and Law.

The CCDI and NSC introduced over 30 new regulations in fulfilling their duties, including on NSC jurisdiction and on handling duty-related crimes.

Two rounds of disciplinary inspections were launched by the 19th CPC Central Committee in 2018, including a special inspection on poverty alleviation covering 13 provincial-level regions and 13 central units.

Disciplinary inspections were also carried out at provincial, municipal and county-level Party committees, as well as in 140 central and state organs and centrally-administered state-owned enterprises.

Among 1,335 fugitives sent back to China in 2018, 307 were former Party members and officials, mostly involved in graft cases.

Xu Chaofan, former chief of Bank of China Kaiping branch in south China's Guangdong Province and suspect of a 485 million U.S. dollar bank embezzlement case, was repatriated in July, 17 years after he fled to the United States.

Yao Jinqi, a former deputy head of Xinchang County in east China's Zhejiang Province who fled abroad in December 2005, was extradited from Bulgaria in November, the first time China had extradited a former official suspected of duty crimes from the European Union.