CHANGCHUN, May 29 (Xinhua) -- China has been the world's largest auto producer and consumer for 13 consecutive years. Despite the COVID-19 disruption, China's major auto production bases have adhered to the dynamic zero-COVID policy and actively promoted work resumption. This has contributed to the stability of the global automobile industry supply chain. 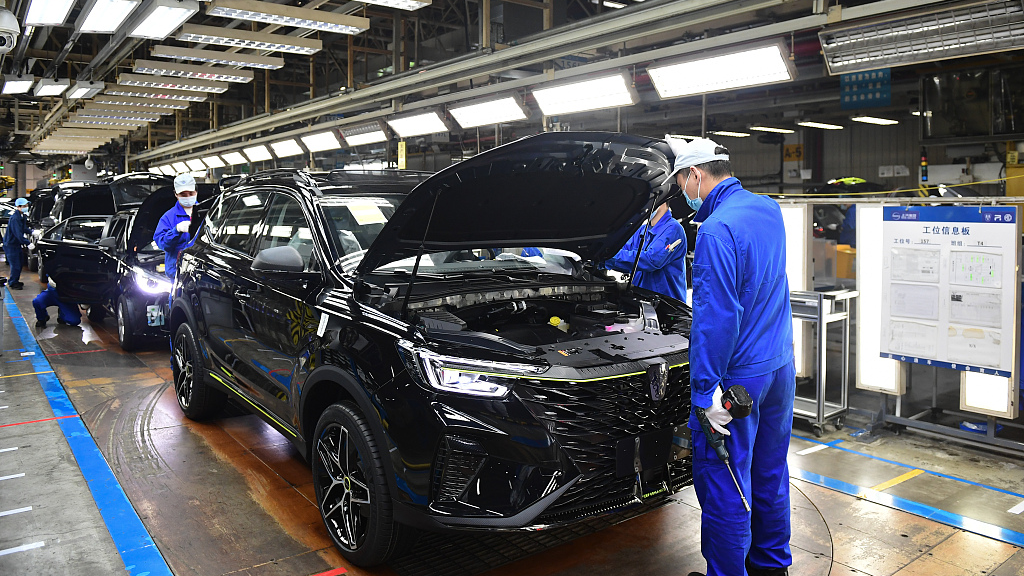 Since the beginning of this year, the epidemic has severely impacted auto bases of Changchun, Shanghai and cities in Guangdong and Hubei provinces. In April, China's automobile production and sales declined to a certain extent compared with the same month last year.

As local authorities reined in the highly contagious and elusive virus, they have actively responded to the impact of the epidemic, helping auto producers resume production, develop new energy vehicles (NEV) and key components such as chips and home brand passenger vehicles, and boost automobile exports.

A ship loaded with over 4,000 electric cars produced by U.S. automaker Tesla's Shanghai Gigafactory left a Shanghai port for Belgium on May 15.

This has been the second export shipment of Tesla cars from Shanghai since the factory resumed production on April 19, just five days after the first batch of vehicles left for Slovenia, according to Shanghai Customs.

Due to the latest COVID-19 resurgence in the city, the Shanghai Gigafactory had suspended production for over 20 days.

Shanghai customs said it has established a communication channel with Tesla to coordinate customs services online and help speed up the delivery of orders.

In the first four months of this year, Tesla's Shanghai factory delivered more than 180,000 vehicles, over 1.7 times the amount for the same period last year, already surpassing the total for 2020.

"We believe that the epidemic situation is only a short-term challenge. We have seen the capacity of all sectors as they cope with the challenges of work resumption," said Tao Lin, vice president of Tesla. "We believe that production will soon return to normal."

Tesla's Shanghai Gigafactory is the first wholly foreign-owned car manufacturing enterprise in China. Deliveries from the Shanghai Gigafactory stood at 484,130 vehicles last year, an increase of 235 percent from 2020 and accounting for 51.7 percent of Tesla's global production capacity in 2021.

As of May 19, China's top automaker SAIC Motor and Tesla's Shanghai Gigafactory have rolled off 21,000 and 26,000 vehicles, respectively since they resumed work, invigorating more than 1,200 auto parts producers in Shanghai.

Leading automaker FAW Group Co., Ltd. based in Changchun, capital of northeast China's Jilin Province, resumed production on April 13 after a month-long suspension. Workers in its five main engine plants in Changchun are working in shifts, while some production lines are operating at full capacity.

Since the resumption of work, the company's daily output of complete vehicles has exceeded 5,700 units, and its factories in Changchun have churned out 93,396 vehicles, as of May 18.

Shanghai and Jilin together account for about 22 percent country's auto industry and have played a leading role in the comprehensive recovery of the industrial chain.

"The stable operation of the auto plants in Shanghai, Jilin and other important auto production bases in China is of great significance to the stability of the global auto industrial chain," said Cui Dongshu, secretary general of the China Passenger Car Association.

In Shanghai, while grappling with the latest COVID-19 resurgence, the municipal government has so far released four batches of "white-list" for companies that are allowed to resume work, among which are some 1,500 auto parts companies.

More than 40,000 workers from SAIC Motor have resumed work in factories under closed management, the company has said. In 2022, SAIC Motor aims to sell more than 6 million vehicles, an increase of more than 10 percent year on year. In April, it sold 167,000 vehicles.

OPPORTUNITY IS BORN IN CRISIS

Data from the China Association of Automobile Manufacturers (CAAM) showed that China's auto sales plunged 47.6 percent year on year in April due to the impact of the COVID-19 pandemic. But bucking the trend, the country's new energy vehicle market sustained rapid growth, with sales surging 44.6 percent year on year.

"China is the world's largest automobile producer and consumer. It has a complete industrial system, diversified market demand and the capacity for self-recycling and strong economic recovery. China's auto industry will overcome difficulties and achieve steady and healthy development," said Xin Guobin, vice minister of industry and information technology on May 20.

"FAW has taken extraordinary measures to focus on marketing, ensure supply and manufacturing and reduce cost to recover the losses caused by the epidemic," said Qiu Xiandong, general manager of FAW.

The GAC Group based in south China's Guangdong Province achieved positive growth in both production and sales during the Jan.-April period year on year.

Dongfeng Motor based in central China's Hubei Province recently took a lead to launch a technological innovation consortium to develop chips, as motor vehicle manufacturers and suppliers are facing a dramatic shortage of microchips globally.

The company has put science and technology innovation in a more important strategic position and strived to transform into a technology-based enterprise.