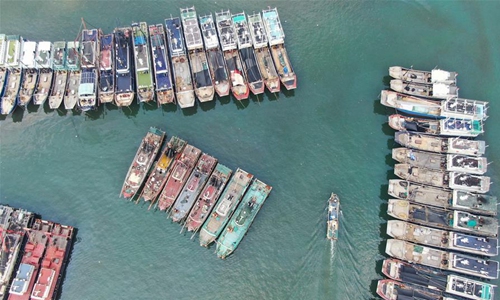 The move is of great significance to the promotion of scientific conservation and long-term sustainable use of fishery resources in open waters. It also highlights China"s image as a responsible fishing power and is a milestone for China"s participation in international maritime management.

The fishing moratorium was majorly imposed to protect squid resources, according to media reports. China started to explore squid resources in the southwest Atlantic and east Pacific around 2000 and has been a major country in terms of fishing, trading and consuming squid.

Initiated by fishermen in East China"s Zhejiang Province, the fishing moratorium was, on the one hand, driven by the natural fluctuation of resources. On the other hand, it was inspired by benefits generated from China"s moratorium system that was set up in 1995. Commercial fish resources in the East China Sea, mainly hairtail fish, have been effectively protected after several years of the moratorium.

China has been leading the world in the conservation of marine fishery resources. The current fishing moratorium on the high seas not only highlights the improvement of the quality of Chinese fishermen, but also demonstrates that China has been voluntarily carrying out its international obligations.

The fishing moratorium is not just a document. It requires coordination of multiple aspects, such as monitoring, data collection and research. Squid resources are spread widely in the high seas and are without governance by international organizations in some areas. On the basis of fulfilling its responsibility to shore up resource conservation and management, China, as a major fishing country in open waters, needs to enhance international cooperation, encourage non-governmental exchange, and initiate the establishment of an international squid resource management institution.

Also, it is important for China to enhance cooperation with regional fishery organizations and nearby coastal states, and to promote the establishment of an international fishing moratorium on the high seas.