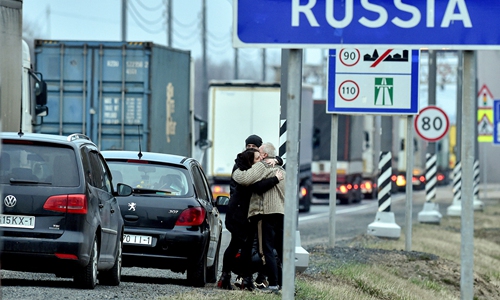 Family members hug each other on Sunday as some of them leave Belarus before the closing of the Russian-Belarus border near the village of Krasnaya Gorka, some 470 kilometers west of Moscow. (Photo: AFP)

While most regions in China have seen a significant drop in the number of confirmed COVID-19 patients, some border cities with Russia returned to a state of tension.

Russia has become China's main source of imported cases as the pandemic in the country continues to worsen, and some Chinese nationals chose to return home via land ports after most flights between the two countries were halted.

On Sunday, Suifenhe, one of the most popular entry ports for Chinese national to return from Russia, said it will start carrying out patrols along the border 24 hours a day, vowing to strictly guard every inch of it. All gatherings will be forbidden.

As of Sunday, Suifenhe had reported 194 confirmed patients from Russia.

All travelers entering Suifenhe will have to take two nucleic acid tests as well as a serum antibody test, apart from 14 days of medical observation and 14 days of home quarantine, said the government.

Public venues such as gyms, kindergartens, and hotels will be closed and only places that offer daily necessities are allowed to open, the government said.

Manzhouli, China's largest land port with a population of 170,000, which borders Russia in the north, faces similar mounting pressure.

On Sunday, Manzhouli reported 34 imported confirmed patients who entered China via the port from Russia, a whopping rise compared with the first case reported on April 6. The Inner Mongolia Autonomous Region had reported a total of 114 imported cases as of Sunday afternoon.

In a statement sent to the Global Times on Sunday, the Manzhouli government said: "it is tapping all potential and will use the power of the whole city to win the battle against the virus imported from abroad."

Its inspection and quarantine capability was over-stretched, as an increasing number of people entered China via Manzhouli, the government said on April 8.

The city is preparing at least three hospitals, including a standby hospital that can accommodate more than 340 beds and is expected to be put into use on Tuesday, the statement said.

As increasing confirmed cases are reported at the Manzhouli port, the government requires all the inward passengers to undergo body temperature checks and nucleic acid tests as well as declare their health status when entering. They will all be quarantined upon arrival, and if they display symptoms of COVID-19, they will be sent to hospitals for observation.

Besides the two border cities, Shanghai reported 51 newly confirmed patients returning from Russia. They are Chinese nationals who departed from Russia on April 10 on the same flight, according to the Shanghai health authority.

Facing an influx of Chinese nationals, land border cities are stuck in a dilemma - they must guard against an inflow of infections but they cannot shut Chinese nationals out, Chinese experts said.

The epidemic in Russia is likely to reach its peak in the next two weeks and Chinese nationals, including students and businessmen, will continue to return due to their increasing worries over the epidemic, Li Yonghui, a research fellow from the Institute of Russian, Eastern European and Central Asian Studies of the Chinese Academy of Social Sciences, told the Global Times.

There are about 150,000 Chinese citizens living in Russia with more than 10,000 employees in Chinese-funded enterprises and about 60,000 self-employed businessmen and 27,000 students, said Chinese Ambassador to Russia Zhang Hanhui in an interview on April 10.

"Despite the Russian government advising the public to follow quarantine rules, many are seen outside and reportedly do not the follow the rules," Meng Kun, a student in Moscow, told the Global Times, noting the lack of strict anti-epidemic rules may be one reason that more Chinese decided to return.

Since the outbreak of COVID-19, many markets in Russia have been suspended and some Chinese businessmen have been considering to return to China, a businessman working in Moscow's Sadovod market told the Global Times.

Besides, three passenger ports on the highway between China and Russia - Pogranichny-Suifenhe, Kraskino-Hunchun, Portavka-Dongning- remain closed, the Chinese Consulate General in Vladivostok said.