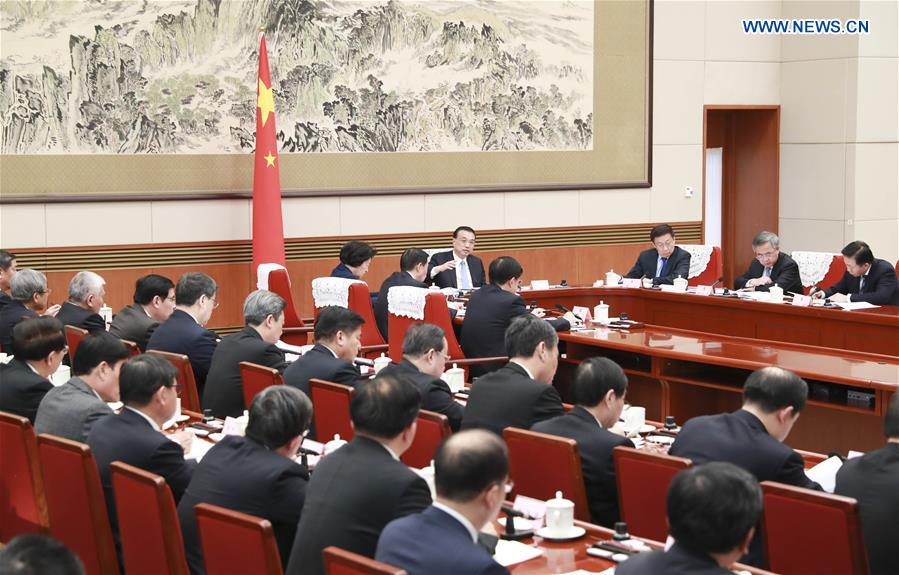 The State Council, or China's cabinet, will send a draft version of a government work report to multiple central and provincial-level government departments to solicit their opinions.

The decision was made at a plenary meeting of the State Council Monday presided over Premier Li Keqiang.

The meeting discussed the report, which will be submitted to the upcoming annual session of the National People's Congress, and arranged the cabinet's work for the first quarter.

In his speech, Li highlighted the achievements made last year as China met its primary goals and tasks for economic and social development.

He cited the country's economic growth remaining within a reasonable range, improved quality of development as well as stable employment with over 13 million new urban jobs created for seven consecutive years.

The premier called for continued efforts to win the three major battles, namely preventing and defusing major risks, eliminating poverty, and pollution control, and promote high-quality development to achieve the goal of building a moderately prosperous society in all respects this year.

Li stressed the importance of further optimizing business environment to stimulate market vitality, and the need to foster new growth engines by pushing forward reform and opening up as well as innovation.

Government departments at all levels should strengthen their sense of responsibility and urgency to start out well in the country's economic performance in the first quarter, said Li.

The country will smooth out monetary policy transmission mechanisms, and give full play to multiple tools including the reserve requirement ratio to lower the financing costs of enterprises, especially manufacturing, private, small and micro businesses, Li added.

The premier also urged further steps to ensure a stable supply of such agricultural products as pork, and keep the price stable for the holiday season.