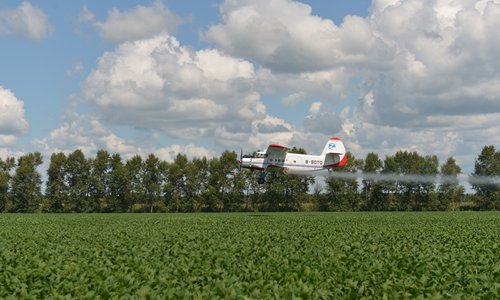 A few month's ago, Lü Guangyan, running a farm near the remote, northernmost border of China, went about his work as usual. Now his farm is receiving attention from the entire country, and even the world.

He pours all the care he can offer into the glossy, green soybean crops in the dark black earth at a local State-run farm in Northeast China's Heilongjiang Province, and checks whether they are growing well every day.

Fortunately, most of the stalks are standing straight. Lü told the Global Times that good weather should make this a bumper year. In addition, he is looking forward to receiving an upcoming national subsidy for soybeans.

The subsidy was announced in late April in an urgent document issued by the Heilongjiang Agriculture Committee to local authorities. The document required the province to increase soybean cultivation by about 333,000 hectares this year.

Lü heard that farmers in other provinces who grow soybeans could get a 3,000 yuan ($440) to 5,000 yuan per hectare subsidy, but he cannot confirm it until this September. Thinking about the lingering weak market price of soybeans, Lü predicted the national subsidy for soybeans could be a positive motivation for more farmers to grow soybeans in the local area next year, amid the ongoing trade friction between China and the US.

Zhang Lichen, vice president of Jiusan Group, a Heilongjiang-based soybean processing corporation in China, said that the trade friction is an opportunity, rather than a danger. "It is a great chance for China to take part in revising the international trade rules."Lü planted soybeans in late April on 72 hectares of land at Heshan Farm, in the Jiusan State Farms area, in Heilongjiang.

The Jiusan State Farms area was built by a group of soldiers, educated youths and revolutionary cadres in 1949. In order to remember the victory day of the War of Resistance against Japanese Aggression (September 3, 1945), the State farms area was named jiu (for the number nine in Chinese) san (for the number three in Chinese). The area has always provided food for the country's needs. During the current trade friction, it continues to fill this role.

Heilongjiang contributed 39 percent of the total national soybean production in 2016, according to the Ministry of Agricultureand Rural Affairs.

Lü said that it is always correct for farmers to follow the national policy. He added that because of the rotation of corn and soybean planting, the cultivation area of soybeans has kept rising in recent years.

A farmer surnamed Yang in the Jiusan State Farms area said that last year, the price for corn was really low. "In the past, the cultivation area of corn reached 70 percent among all crops, while now, soybeans have replaced it," he added.

According to the Heilongjiang State Farms Statistics Bureau, 2016 witnessed the most balanced planting situation - the planting area for corn and soybeans was almost the same in State farms across the province, with 620,667 hectares for corn and 634,667 hectares for soybeans. The even rotation and weak price for corn in 2016 have resulted in a greater area for soybeans in 2017, and in 2018 a greater area for corn across the province.

Even though the urgent document issued by the Heilongjiang Agriculture Committee also encouraged them to boost soybean production by an additional 133,333 hectares in rotation land with a subsidy of 2,250 yuan per hectare for a year, some farmers could not meet the target.

According to the director of the agricultural bureau at the Jiusan State Farms Administration, Zou Changshi, they received the document encouraging soybean planting in the area at the end of April, "but it was too late. Most seeds and fertilizer for crops such as corn had been prepared in early spring."Alternative supply."

China imported a significant amount of soybeans from the US, but this crop is now being taxed under new tariffs imposed by China in retaliation against US tariffs on Chinese products.

Instead of importing American soybeans, China has many alternatives.

Scientific research on boosting production, seed breeding, and cultivation measures all affect soybean planting. This research is on the agenda of experts at the Soybean Research Institute of the Heilongjiang Academy of Agricultural Sciences.

Wang Jinsheng, an associate research fellow specializing in soybean cultivation at the institute, said the yield of soybeans is determined by the potential of seeds and cultivation techniques. Researchers usually spend 13 years to breed a new type of seed and test different cultivation measures.

Successful varieties include Heinong 87, whose oil content could reach as high as 23 percent so that it has better flavor after being processed than other seeds. The protein content of another successful variety, Heinong 48, could reach 44 percent.

Instead of importing soybeans from the US, China has been seeking other suppliers such as Brazil, Argentina, Canada and Russia in recent months.

China and Russia are already cooperating on soybean production.

Russia's location, just across the border from Heilongjiang Province, makes cooperation with it particularly attractive.

According to the provincial agriculture committee, 600,000 hectares of Russian land along the border is being farmed by Chinese this year, the largest amount in recent years.

As the chief strategy officer at Jiusan Group, Zhang said that since Russia has strict standards for using pesticide and fertilizer, the quality of soybeans there is even better and safer than in China.

In 2017, 80 percent of soybeans in China came from overseas, among which US soybeans accounted for one-third of the total imported volumes. These soybeans are mainly used for soy meal and soybean oil.

Zhang noted that changes to the demand side for soy products might be another way to solve the problem of tariffs against the US. For example, soybean meal, used as animal feed, could be replaced by rapeseed dregs, cottonseed meal, peanut meal and palm meal. With these substitutions, there would be no need to import a great amount of soybeans to produce soy meal.

"The world can return from an unbalanced situation to a new balanced one. In the past, we didn't import soybeans from Canada, but now we do. Countries like India and Russia could also sell a few soybeans to China, so there will be no problem [for our soybean supply]," he added.