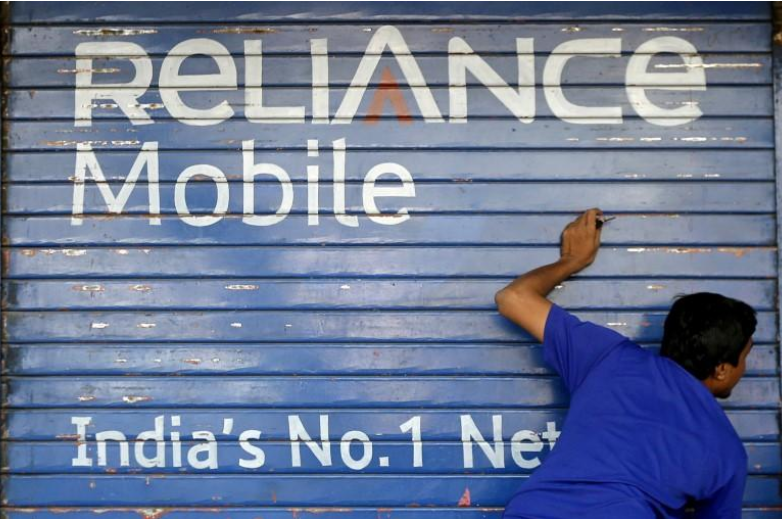 A man opens the shutter of a shop painted with an advertisement of Reliance Communications in Mumbai, India, November 3, 2015. Photo: Reuters/Shailesh Andrade

A lawyer for CDB told the National Company Law Tribunal that the Chinese bank had filed to withdraw the petition. The tribunal allowed CDB’s plea to go forward.

CDB, which is owed around $2 billion along with two other Chinese banks, had filed the petition in November seeking insolvency proceedings against RCom, saying a large amount of loan principal and interest payments was overdue.

After RCom’s debt-reduction plan, including an asset sale to Reliance Jio Infocomm Ltd [RELIB.UL], was announced last week, CDB told Reuters that it was in talks with RCom.

Details of the terms of a possible settlement between the Chinese bank and RCom were not immediately known. By 0847 GMT, RCom shares were trading 4.2 percent higher in a Mumbai market that was up 0.4 percent.

Last week, RCom signed a deal to sell most of its wireless assets to Jio in a deal people familiar with the matter said was worth nearly 240 billion rupees ($3.8 billion), subject to final adjustments at the time the transaction closes.

RCom has said it will use proceeds from the deal, expected to close by March, to repay part of the $7 billion it owes to Indian and foreign banks.

As part of an overall debt-reduction plan, RCom Chairman Anil Ambani said RCom would shift 100 billion rupees of debt to a special purpose vehicle housing its real estate assets, including a corporate park in a Mumbai suburb.

RCom still faces two other insolvency proceedings - one by the Indian unit of Swedish telecom equipment maker Ericsson and the other by public relations firm Fortuna - over unpaid dues.

RCom has struggled under heavy debt and reported a string of losses during a price war, triggered by new entrant Jio which is controlled by Anil’s elder brother and India’s richest man Mukesh Ambani. That prompted RCom to reduce operations by shutting down its wireless business.

As it exits the wireless telecommunications segment, it will be left with a division housing its undersea cable business and internet data centers.

The firm is also looking for an equity injection from global strategic partners for further debt reduction and is in talks to sell a stake in the scaled-down business, RCom said last week.