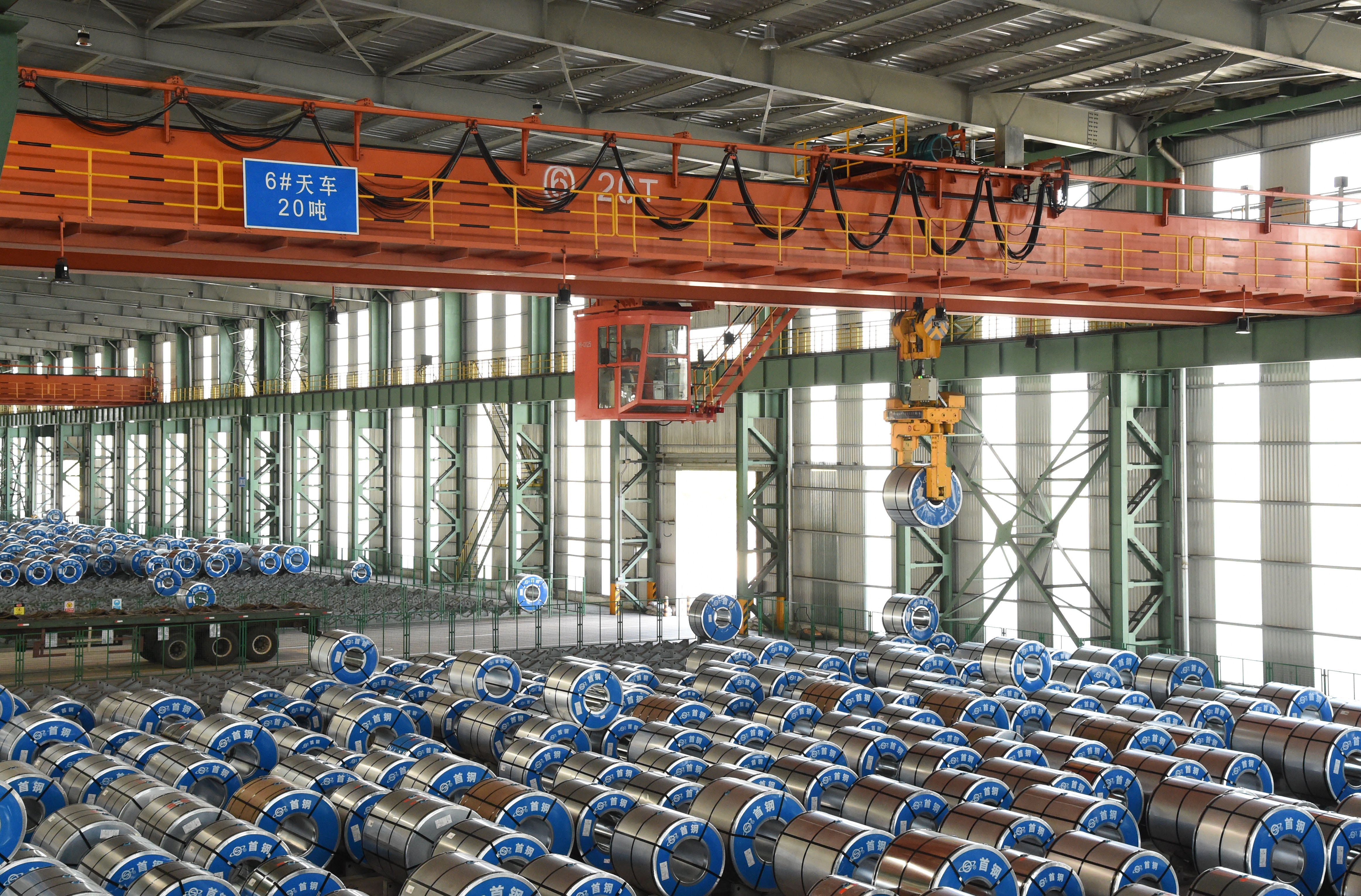 An automatic overhead crane at the No. 5 warehouse of the finished products wharf at Shougang Jingtang Company in Tangshan, North China's Hebei Province, August 30, 2019. (Photo: Xinhua)

BEIJING (Xinhua) -- In the former plant of Chinese steelmaker Shougang in western Beijing, the construction of a large ski-jumping platform -- a venue for the Beijing 2022 Winter Olympics -- is underway.

Not far from it, an old coal storage workshop has become a winter sports training center.

Founded in 1919, Shougang Group is working to transform its past production premises in Shijingshan District into a new landmark of the capital, featuring winter sports events, fairs and exhibits, after it has moved its production to the eastern coastal Caofeidian in neighboring Hebei Province. Caofeidian-based Shougang Jingtang Company focuses on high-end products and aims to be a first-class steel enterprise.

"The change is really incredible. My job has been changed from the one related to 'fire' to one related to 'ice,'" said Liu Boqiang, a steel rolling worker-turned ice maker at the national winter sports training center in the old park.

Sunday marked the centenary of the establishment of Shougang, whose evolving story provides a window to the country's development and progress over the past 70 years.

Prior to the founding of the People's Republic of China in 1949, the Shijingshan plant accumulatively produced only 286,000 tonnes of iron. In 1958, the plant began a large-scale expansion. Workers built the first side-blown converter for steel making within two weeks, ending the company's history of no steel.

As the country's historic reform and opening up began in 1978, Shougang gained more decision-making power in investment, financing and foreign trade, ushering in a period of rapid development, recalled Liang Zongping, a senior executive of Shougang Group.

From 1978 to 1994, Shougang's steel output increased from 1.79 million to 8.24 million tonnes. Its revenue and profit increased tenfold.

In an effort to reduce air pollution, Shougang initiated its relocation to the Caofeidian port in 2005, the largest industrial relocation in China since the 1960s. The relocation also marked the high-end transition for Shougang.

With a designed capacity of 9 million tonnes of iron and nearly 19 million tonnes of steel and steel products, the first phase of Shougang Jingtang was put into operation in 2010. At the end of the same year, Shougang's production at Shijingshan permanently ceased.

Compared with the production of low-end building materials in the past, the company now produces steel for high-end products such as home appliances and automobiles.

The plant also realizes zero emissions as all waste from the production process can be recycled, and it adopts seawater desalination technology to reduce consumption of natural freshwater resources, according to Zeng Li, general manager of Shougang Jingtang.

NEW, UNIQUE USE OF HERITAGE

Besides the winter sports facilities in Shougang's old industrial park, construction is underway to transform the No. 3 blast furnace area into a center for experiencing industrial culture, sight-seeing and art exhibits.

"The combination of industrial heritage and winter sports is unique in the world," Gui Lin, a planning official of the Beijing Organizing Committee for the 2022 Winter Olympics.

The old industrial zone has hosted a number of sports events such as the world's ice hockey and curling competitions as well as service trade and technology cooperation seminars.

In February, Beijing issued an action plan on accelerating the construction of the new Shougang comprehensive service area for high-end industries from 2019 to 2021, with the aim of building it into a new landmark of the capital city with global influence in 2035.

"The transformation of Shougang's old industrial zone is just beginning," said Bai Ning, assistant to the general manager of Beijing Shougang Construction Investment Company. Only 15 percent of buildings in the northern part of the park have been renovated; much more space will be developed.

"We hope that all transformed buildings will become artworks of different styles," he said.