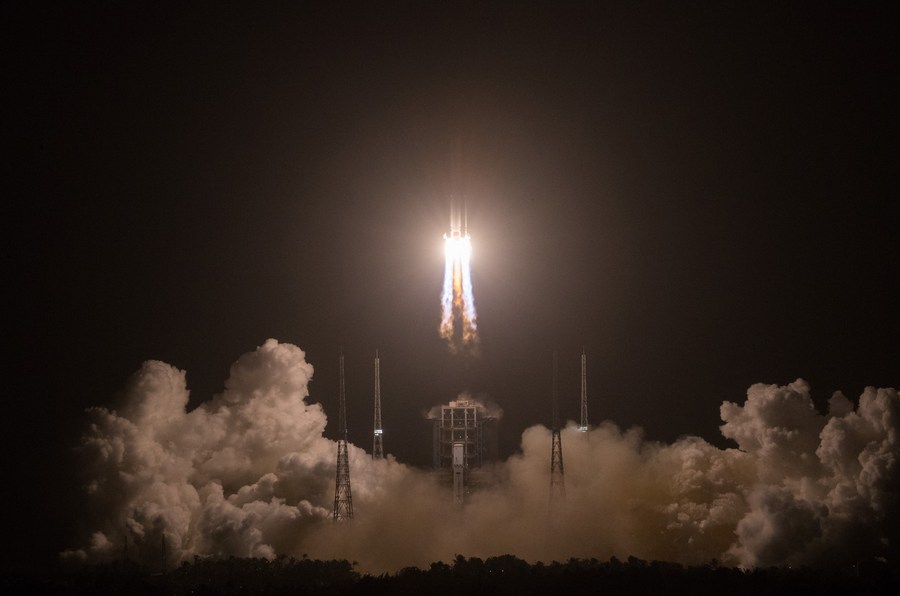 A Long March-5 rocket, carrying the Chang'e-5 spacecraft, blasts off from the Wenchang Spacecraft Launch Site on the coast of southern island province of Hainan, Nov 24, 2020. (Photo: Xinhua)

China's Chang'e 5 robotic lunar probe carried out a braking maneuver on Saturday evening and then successfully entered a lunar orbit, according to the China National Space Administration.

The administration said in a statement that a 3,000-newton-thrust engine on the spacecraft was activated at 8:58 pm and worked about 17 minutes when the probe reached a position about 400 kilometers above the moon.

A key orbital control measure for any lunar mission, the braking operation was conducted to reduce the spacecraft's speed to make sure it can be captured by the moon's gravitational field rather than accidentally flying past the celestial body.

The 8.2-metric ton Chang'e 5 has four components -- orbiter, lander, ascender and re-entry capsule. It is China's largest and most sophisticated lunar probe.

The spacecraft was launched by a Long March 5 heavy-lift carrier rocket on early Tuesday morning at the Wenchang Space Launch Center in Hainan province, in an attempt to realize the world's first mission to bring lunar samples back to Earth since 1976.

After its arrival in lunar orbit, the probe will fly around the celestial body for a certain period of time and will then separate into two parts, with the orbiter and re-entry capsule remaining in the orbit while the lander-ascender combination descends toward the lunar surface.

The landing combination will make an engine-assisted touchdown on the moon and later start conducting such assignments as using a cutting-edge drill to obtain underground rocks from 2 meters beneath the surface and a mechanical arm to gather surface dirt.

If everything proceeds smoothly, about 2 kilograms of stones and soil will be collected and packed in a vacuumed metal container inside the ascender.

After the two-day surface operations are done, the ascender's rocket will elevate it to lunar orbit to rendezvous and dock with the re-entry module. It will transfer lunar samples to the module and then undock from the latter.

Back on the lunar surface, the lander will continue using its three scientific payloads to carry out survey and measurement -- the panoramic camera is tasked with mapping topography of the landing site; the infrared spectrometer will determine physical composition of stones and dirt around the landing site; and the soil measurement instrument will detect and analyze the subsurface structure of the drilling point.

The entire mission is scheduled to last around 23 days, according to the space administration.

Considering these highly sophisticated operations, Chang'e 5 will be more difficult and challenging than previous Chinese lunar expeditions, designers have said.

If the mission ends successfully, it will become China's first space activity that has retrieved extraterrestrial substance and will also make China the third nation in the world to bring lunar samples back after the United States and the former Soviet Union.