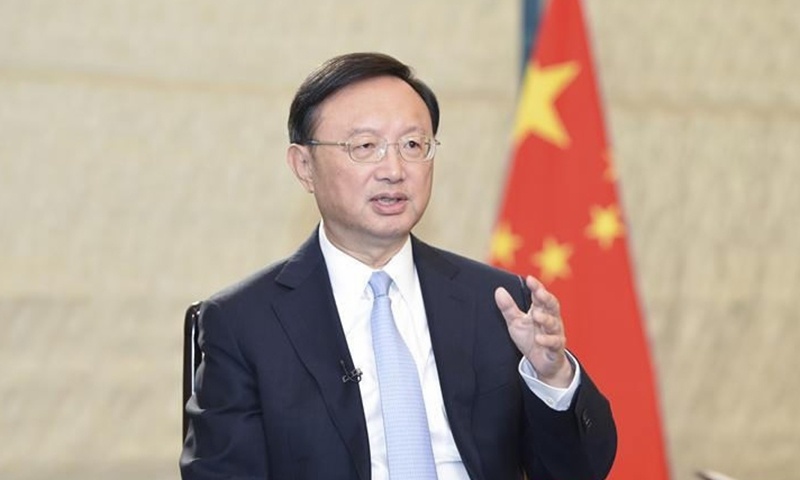 When China's senior official on foreign affairs Yang Jiechi delivered a speech on China-US relations on Tuesday, he urged the Biden administration to remove "stumbling blocks" for exchanges and reaffirmed China's bottom lines on issues regarding its sovereignty, while stressing the hope for cooperation.

Chinese experts said the remarks provide a pragmatic route map to fix China-US ties, as well as highlighting some principles and specific measures. US President Joe Biden and his administration should seize the opportunity and make concrete moves to ease the tension, as well as restart dialogue and cooperation.

Yang, a member of the Political Bureau of the Communist Party of China Central Committee and director of the Office of the Central Commission for Foreign Affairs, delivered the speech via video link at the invitation of the US National Committee on US-China Relations (NCUSCR). Yang is so far the most senior Chinese official to openly send a message to the US since Biden took office on January 20.

Yang mentioned the word "cooperation" 24 times, a theme he wanted to highlight. "By focusing on cooperation and managing differences together, the two sides will be able to return the relationship to the course of sound and steady development," Yang said.

At a time of great difficulty for China-US relations, the force for bilateral exchanges and cooperation has never been absent, Yang said, adding that a great number of institutions, groups and individuals in the US, including the NCUSCR, have made their voices heard and their views known through co-signed letters, articles and webinars.

Chinese analysts said that in the Trump era, the White House gave a cold shoulder to these institutions and individuals, so their rational voices were contained by hawkish and radical views. Now, by providing sub-national platforms and channels for dialogue, these institutions will regain influence and play a bigger role in bridging the two countries.

Yang reaffirmed China's bottom lines on Taiwan, Hong Kong, and the two autonomous regions of Xinjiang and Tibet, and urged the US to stop its attempts to hold back China's development by meddling in China's internal affairs.

Li Haidong, a professor at the Institute of International Relations of China Foreign Affairs University, said Yang's speech shows the US that China is sincere in its desire for cooperation. "The Biden administration will definitely treat this speech seriously," Li said.

Yang picked out areas where China and the US can cooperate. "COVID response, economic recovery and climate change, among others, could become promising areas of cooperation for China and the US," he said.

He mentioned cooperation on renewable energy and low-carbon technology, sustainable development, military, law enforcement, drug control and cybersecurity, as well as cooperation at the UN, the World Health Organization, the G20, APEC and other multilateral platforms to enhance global governance and promote globalization.

"I hope that the new administration will remove the stumbling blocks to people exchanges, such as harassing Chinese students, restricting Chinese media outlets, shutting down Confucius Institutes and suppressing Chinese companies. These policy measures are not only wrong but also unpopular," Yang remarked.

Diao Daming, an expert on US studies at the Renmin University of China, told the Global Times that Yang's speech provides a road map for recovering bilateral ties and it serves the mutual benefits of the peoples from the two countries.

Li said the Biden administration does not have many options on China policy as long as it wants to have some achievements on the COVID-19 fight, economic recovery as well as climate change issues, which are priorities listed by Biden.

"Without cooperation with China, Biden can hardly realize his goals in these priority issues, and if he makes no significant progress, he and the Democrats would be seriously challenged in the midterm elections in 2022 and the general elections in 2024," Li said.

Although senior Chinese diplomats have sent messages of cooperation multiple times, US Secretary of State Antony Blinken is still being tough toward China. In an interview with NBC News on Monday, he criticized China on Hong Kong affairs and COVID-19, and said the US should give a "haven" to lawbreakers who flee Hong Kong.

"Any illegal acts should be punished by law, and if the US agrees this principle applies to what happened at Capitol Hill on January 6, then it should rethink and correct its wrongdoings that encouraged lawbreakers in Hong Kong," Chinese Foreign Ministry spokesperson Wang Wenbin said when responding to Blinken's words at Tuesday's routine press conference.

In response to Blinken's criticism of China's transparency on the origins of COVID-19, Wang urged the US to also open up to the work of tracing the coronavirus origins.

Diao said Blinken's remarks have some consistencies with his predecessor Mike Pompeo, as they both show an ideological bias, which is shared by both conservative and liberal forces in the US.

However, there is a difference - Pompeo's harsh words matched the Trump administration's anti-China actions, but Blinken's remarks are to some extent an expression to please US society which is blanketed by the toxic atmosphere of Sinophobia, with no further concrete provocations, Li said.

The Trump administration had pursued some misguided policies toward China. The root cause is a strategic misjudgment by some in the US - they view China as a major strategic competitor, even an adversary, Yang said in his speech. "That, I am afraid, is historically, fundamentally and strategically wrong."

Lü Xiang, an expert in US studies with the Chinese Academy of Social Sciences in Beijing, told the Global Times on Tuesday that to what extent the words of Biden's cabinet members reflect the new US China policy is a question. "Biden will make his own remarks soon, and we hope he can provide a clearer and more authoritative answer."

Blinken said in the interview on Monday, "The challenge posed by China is as much about some of our own self-inflicted weaknesses as it is about China's emerging strength."

It seems as if US decision-makers want to wait a bit longer so that the US can recover from its current crisis and regain some advantages to deal with China, as the China policy is not their priority, Chinese analysts said. However, Biden should make a significant response to China's sincerity within his first 100 days, as the sincerity and patience will not last forever.

Diao noted that the Biden administration is not fixing bilateral ties, but adjusting Trump's China policy to make it better serves the US interests. There are likely to be positive changes, but China will not expect all the changes to be positive.

"Urging Biden to fix bilateral ties is not just for the sake of China's interests, but for the benefit of the American people as well, so we hope the US will respond, and the sooner the better," Lü said.

"We never had the illusion that Biden would totally abandon hostility against China, but we also won't let go of the hope that ties can be fixed," Diao said.