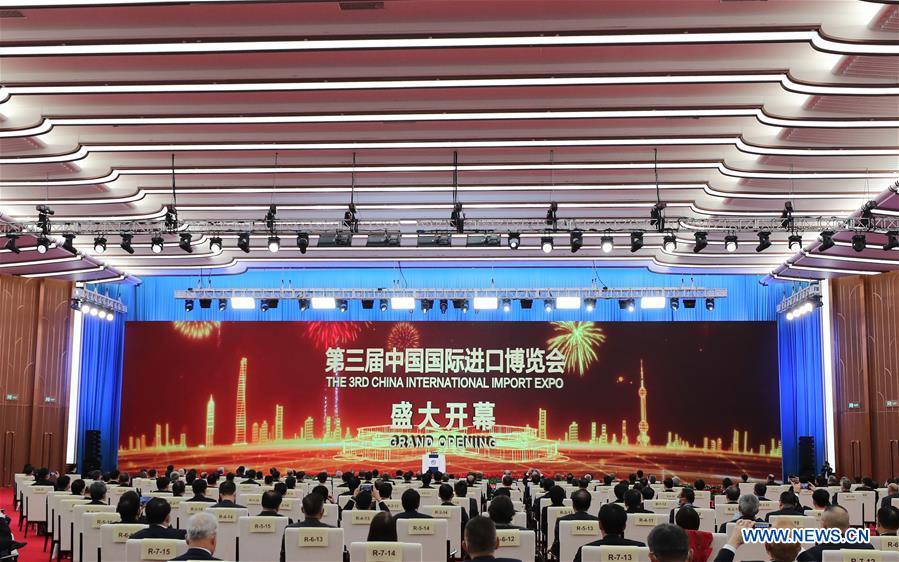 The opening ceremony of the third China International Import Expo is held in east China's Shanghai on Nov. 4, 2020. (Photo: Xinhua)

World leaders said on Wednesday that the third China International Import Expo (CIIE) is a practice to open up new space for global development and share opportunities with the world, and will inject impetus into the struggling global trade and economy.

Addressing the expo's opening ceremony via video link, leaders from many countries spoke highly of China's success in overcoming the challenge brought by the COVID-19 pandemic and holding the third CIIE as scheduled.

Pakistani President Arif Alvi said this year's expo will help worldwide exporters better understand China's demand for commercial goods and expand exports to China, so that the global trade will be promoted. He noted that as China is constantly developing and progressing, it also provides more commodities for countries around the globe.

The president congratulated China on holding such a large-scale import expo, saying he believes that through the CIIE, China's trade relations with worldwide countries will become closer.

South African President Cyril Ramaphosa thanked President Xi Jinping and the Chinese people for overcoming difficulties and holding the third CIIE as scheduled, noting that the promotion of trade and investment is of great importance to the current economic recovery.

Mentioning that Africa is stepping up the establishment of a free trade zone, Ramaphosa said China is a long-time important trade partner and that the CIIE provides an important platform for African countries and enterprises. South Africa has actively participated in previous CIIEs, he said, wishing the third CIIE a success.

Chilean President Sebastian Pinera thanked Xi for the invitation, saying that under the leadership of Xi, China is committed to promoting mutual understanding and active cooperation among countries in the world.

He called for a long-term view, saying that continuous efforts are needed in eradicating poverty, reducing social inequality, improving health service and education, promoting the digital technology revolution and tackling climate change, in a bid to achieve sustainable development.

Uzbek President Shavkat Mirziyoyev said holding such a large-scale event as the CIIE has fully demonstrated China's economic recovery, and also highlights the significance of closer cooperation in international trade.

Serbian President Aleksandar Vucic said Serbia has the honor to participate for three consecutive years in the CIIE, the world's top economic and trade promotion platform established for various countries by China, which is the best-performing economy in the world.

In recent years, Chinese investors flocked to Serbia to invest and start businesses, and Serbia and China still have broad space for cooperation in transport infrastructure, he said.

Spanish Prime Minister Pedro Sanchez said Spain and China share a vision for future development and both countries are dedicated to establishing a stable and predictable multilateral framework to meet the current and future demand in various fields, such as international trade, interconnectivity and climate change.

Papua New Guinean Prime Minister James Marape said the economic recovery of China, the second largest economy in the world, is very significant to various countries in the world.

As an important platform for international trade, the CIIE undoubtedly will open a new space for the development of various countries and provide power for global trade and economic growth under the current difficult situation, Marape said.

Hungarian Prime Minister Viktor Orban said that the third CIIE is held during a special period, and the pandemic tells people that countries need to respect each other, otherwise challenges will become graver.

Orban reiterated that Hungary is dedicated to strengthening cooperation with China and other countries along the Belt and Road to co-build it, stressing that this is more important than ever before.