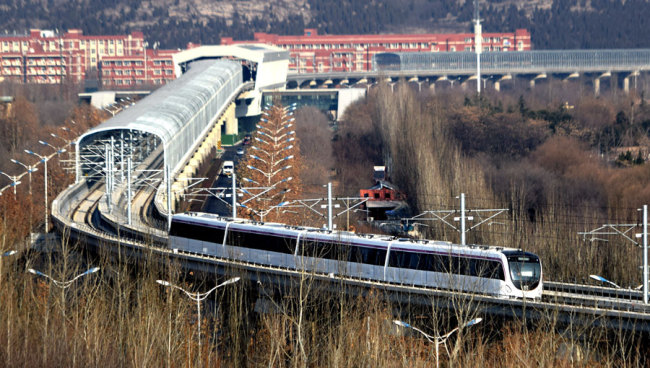 Earlier, Jinan, known as "the City of Springs" due to its large number of natural artesian springs, was one of the last few provincial capitals with no metro service.

The springs bring tourists to the city, but also pose a dilemma: to develop underground transportation or to protect groundwater?

The launch of the first metro line came three decades after local authorities first proposed to construct the metro system and scrapped construction plans several times amid fears any construction might affect the springs.

In 1988, authorities in Jinan first proposed to build the metro system after conducting a survey on residents' commuting options, according to Zhao Yanzhu, an 80-year-old expert in the field of hydrogeology, who has witnessed the ups and downs of the city's metro system development.

After years of study and debates, experts finally agreed in 2009 that as long as the metro lines avoid the downtown where the majority of springs are concentrated, the construction would not have an impact on the groundwater system, according to Li Liping, professor with Shandong University and deputy chief engineer of the Jinan Rail Transit Group, one of the constructors.

Mainly located in the western part of the city, the first metro line covers a distance of 26.1 km with 11 stations, expected to help ease traffic congestions in the city.

"We have waited for a long time, but it is worth waiting for," said local resident Xin An, one of the first passengers of the metro line, construction of which started in 2015.

A number of advanced technologies were used in the project, including a groundwater pumping and recharging technology and ground-penetrating laser radar to image the subsurface.

"Subsurface imaging is like performing a gastroscopy and building underground tunnels is like threading a needle through blood vessels while avoiding all the arteries," said Li.

The metro line was built as close to the ground as possible to reduce impact on the groundwater system to the minimum, he said.

The groundwater table along the metro line has been kept almost the same as it was before the construction, said Wei Changlin, an engineering manager of the metro line.

The successful experience in building the first metro line will be used in the next metro projects of the city.

"Constructors have been paying huge attention to the springs' ecosystem. All the metro lines, including another two under construction, can 'live in harmony' with the springs," said Lu Linhai, assistant general manager of the Jinan Rail Transit Group.